There is hot, hot, hot debate about which African country produces the best coffee - but we're not (too) interested in which is the best because each country offers a wealth of variety. What we plan to do is help you understand what each Coffee rich African country offers, and which is best for you. Your tastes... and for your caffeine requirements.

So let's dig in - which African countries produce the best coffee, and what are the brands we think lead the market there.

In my humble opinion, Tanzania has the best coffee in East Africa, if not the whole continent. The country is most well known for its Medium Roast African coffee which has a lighter flavour, but a bigger dose of caffeine.

The most well-known regions of Tanzanian coffee are the monotonous regions in the north. The city of Arusha is the gateway to the coffee plantations around Mount Kilimanjaro and Mount Meru, and Tanzania's biggest tourist attractions: the national parks including the Ngorongoro Crater & the Serengeti.

Tanzania's northern territories are some of the most visited by western tourists in the world. Arusha's coffee lodges and close proximity to the Northern Safari Circuit (Serengeti & Ngorongoro Crater) - however, Tanzania is often overlooked on the world stage for the quality of its coffee. Some publications have published the 'Tanzanian Peaberry Coffee' as the best in the world.

Mostly, the northern region is known for the growth of Arabica and Robusta beans. After speaking to a few Coffee insiders in Tanzania, they claim that the coffee in the country is so good that some companies in Kenya buy coffee from the north, rebrand it and sell it as Kenyan. We cannot prove it but we will take their word for it.

A lesser-known region for Tanzanian coffee is Mbeya - on the mountainous southwest close to the Malawian/Zambian border. We visited a small scale Tanzanian/ German operation that exports their crop of premium Blue Mountain (originally from Jamaica) to Germany. The medium roast coffee from Mbeya was some of the finest we had tried from Tanzania, and potentially the whole of Africa. The flavours are full-bodied, with a wonderful floral sweetness and caffeine buzz.

I love this coffee so much that I have asked for a batch to be sent to me directly - it did cost more but was worth it. You can find them on Facebook here: https://www.facebook.com/Lunji-Coffee-Farm-686579751360488/ 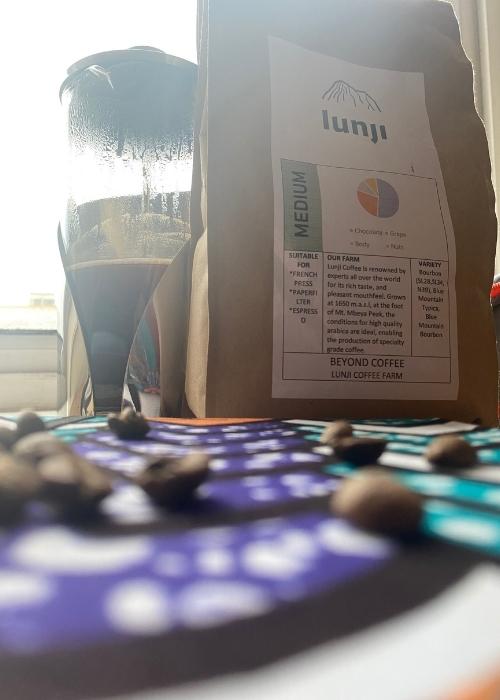 Kenya is likely to be the most well-known coffee, particularly in the UK. Whether this has been due to Kenya's close relationship with the UK (through Colonial activities and a high number of UK ex-pats) or clever marketing. Kenya AA (AA being the classification of the largest beans) is often listed to be within the top ten coffee brands in the world, and its rich and full flavour has given the country a reputation for having exceptional coffee.

There are numerous regions where coffee is grown in Kenya but the most well-known are found Mount Kenya region, Nyanza, Aberdare Range and Kisii. Coffee grows will in higher altitudes which can be found north of Nairobi and the eastern coast of Kenya. The beans grown are known as 'Columbian Mild' which means they have a rich, full-flavour body that can produce a beautiful strong black coffee. There is a slight acidity and light aroma that is not common with Colombian grinds.

Most of the coffee grown in Kenya is by local farmers who sell their product to larger collectives like the Nairobi Coffee Exchange. 70% of the Kenyan Coffee industry is owned by small-scale holders meaning that almost all of the Kenyan coffee you buy, supports a local farmer. Even reason to buy African Coffee.

Ethiopia has long held the crown of being considered the best African country for coffee. Only recently has Kenya come close. Ethiopia is the hidest producer of Coffee in Africa, and the world; it makes up around 3% of the global coffee market. The country's reputation continues from the British colonial era.

The country borders the north of Kenya and is considered by many as the origin of African Coffee. Without a doubt, Ethiopia's coffee is something special. It is made famous by its unique dry and richly flavoured coffee beans. Starbucks uses a range of Ethiopian coffee for their blends - so they consider it as the best coffee in Africa!

There are three main coffee-producing regions in Ethiopia: Sidama, Henika and Harar. Sidama is the highest region where coffee is cultivated at extremely high altitudes. This causes the coffee to grow slower and absorb more nutrition from the earth; leaving a light, complex and robust flavour. The notes are acidic and ensure the coffee has crisp notes of lemon and citrus. Genika is known for arabica beans which have a classic spicey, deep floral flavour, and Harar is the oldest producing region of Coffee. Coffee from Harar is fruity like wine. Almost all of the cultivation in this region is also done by hand.

Personally - I think that the Sidama region is a little too bitter for my liking, despite it being the region exploring the most coffee. Harar is where the gold is.

Uganda is a country that you often do not associate with great coffee unless you find it on the shelf of your local supermarket.

The coffee beans from Uganda are similar to other high-altitude east African crops with some unique features which make it more identifiable. The closest Coffee to Ugandan is Kenyan, but there is an element similar to Ethiopian coffee too.

The Ugandan coffee beans have an acidic winey flavour and a light complexity to the body. The after notes are quite light and bitter.

The best we have found may be subjective, but you can find it here: https://www.threeavocados.org/products/uganda-bugisu