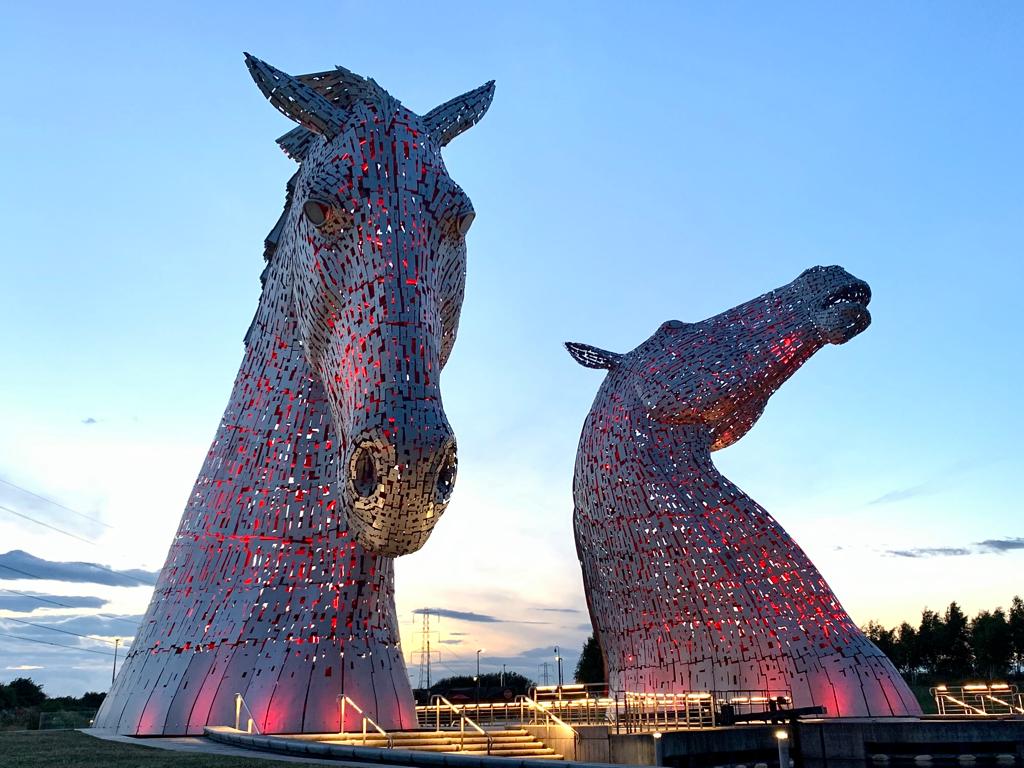 Despite being opened less than 10 years ago, the Kelpies have already become one of the most popular tourist attractions in central Scotland. Located between Falkirk and Grangemouth. These sculptures were completed in early 2014 and have quickly become a favourite with locals and tourists alike. We wanted to write about the kelpies because they're special, and it is fascinating to see how quickly they've become a popular attraction in Scotland (with a 5-star rating from the Scottish Tourist Board). We'll be looking at why they were built and the team that built them, as well as some interesting information about these monuments and information you need to know before visiting. Let's get into the article:

Who created The Kelpies?

The sculptures were designed by Andy Scott and they were completed by a team of builders in late 2013. Originally, Andy Scott created three created miniature versions of The Kelpies in his Glasgow studio, which were then scanned by lasers to help steel fabricators create the full-scale versions. We imagine that when Scott was creating the smaller scale models in his studio, he never could have imagined how stunning they would look at full-size. Visit Andy Scott's website here - andyscottsculptor.com 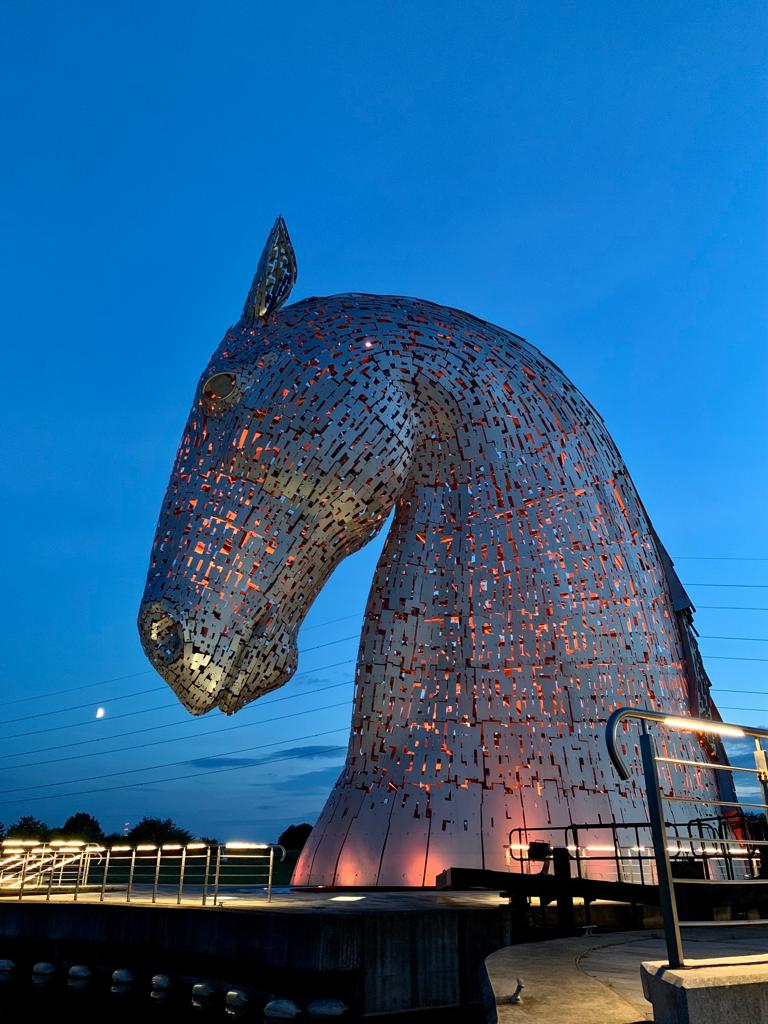 What do The Kelpies represent?

Not all art has to have meaning, and we think the Kelpies are beautiful in their own right without needing to have any story behind them. But interestingly, the Kelpies do represent something - they're said to represent the lineage of the heavy horse industry in Scotland and the impact that it had on the Scottish economy. The statues are essentially an homage to the horses which pulled the wagons, the machinery, and the coalships which shaped the layout of central Scotland.
The Kelpies were named after water kelpies which are mythical creatures from Scottish folklore. They were said to be shape-shifting beasts that could take any human form.

One of the best things about The Kelpies is that if you wish, you can simply admire them as you're driving past. If you're driving from Edinburgh to Stirling along the M9 then you'll get a great view of them from the road (obviously we don't condone staring for too long if you're driving), but we think it is well worth taking the time to actually visit the Helix park itself as you not only get to appreciate the monuments from up close but there's also some other interesting things to see there. However, there are a few things to be aware of before you visit the Kelpies, here are some tips:

When is the best time to visit?

The best time to visit if you want a quiet visit is during the week because there will be fewer people there, but we went on a Friday and we definitely wouldn't describe it as busy. Although there are advantages to visiting during the day such as being able to enjoy the facilities like the cafe and the tour inside the Kelpies, we think you should visit at night - when the Kelpies are lit up, they look amazing. However, as we mentioned you won't be able to go on the tour or visit the cafe. You won't even be able to use the toilets as they'll be closed, but there is a McDonald's nearby which is ideal for a toilet stop! 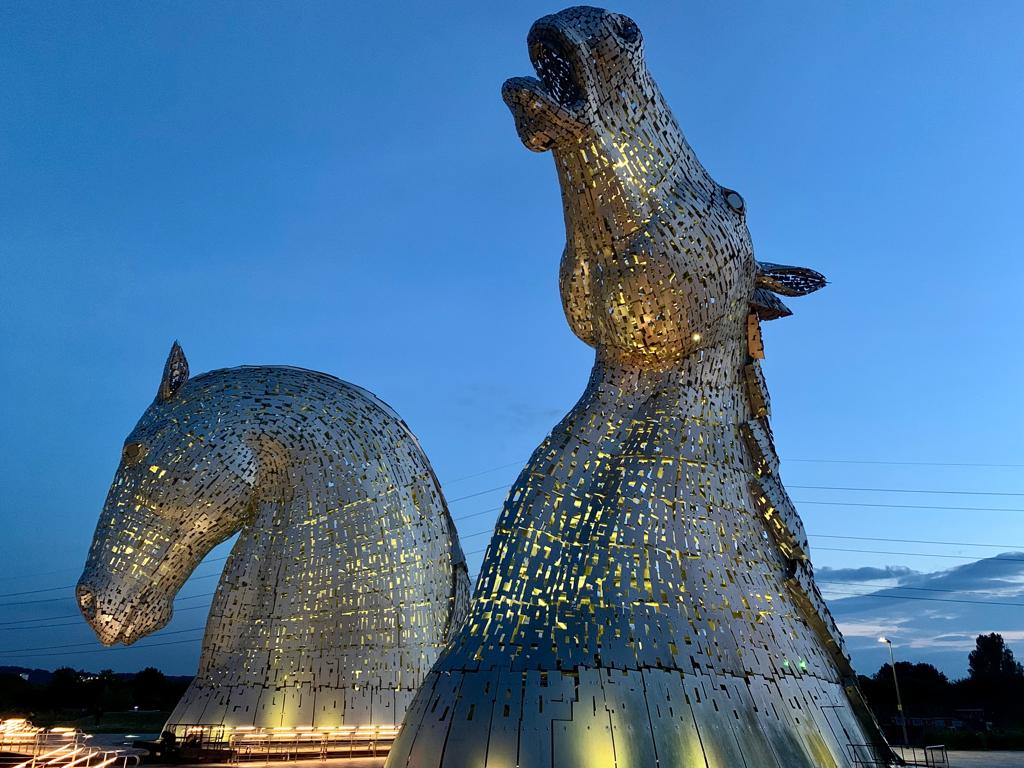 How should you get there?

Unfortunately, probably the main issue with visiting The Kelpies is that getting there can be a little bit of a hassle, even if you have a car. The turnoff from the M9 is fairly straightforward, but we feel the roundabouts leading up to the Helix Park could be a little better signposted. Also, getting the bus straight there (as of August 2022) isn't an option as the bus stop was closed. The nearest bus stop you could get off at was the stop at Falkirk Stadium, which is about 15 minutes away.

If you're staying in the area then we think the best way to travel is by bike, and you can hire bikes with a company called Forth Bike (pictured). You can get a day pass for £4, and these will allow you to cycle around the Helix Park and also cycle all the way to Falkirk or Stirling. Learn more about where you can hire a Forth Bike here. 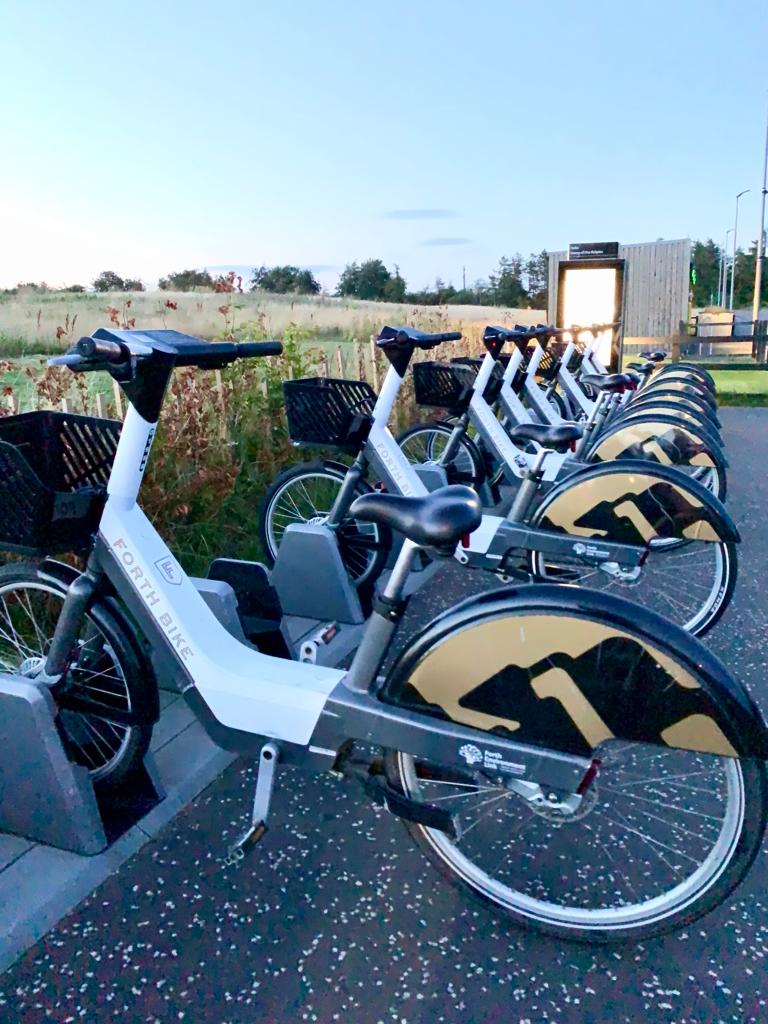 What can you do during the visit?

If you're visiting The Kelpies at night (as we recommend), there isn't much more to do than simply admire the scale and beauty of the sculptures, take lots of photos and have a wander around the area, listening to the peaceful sound of the running water. Sounds pretty perfect to us, but if you're looking for a bit more action and you're willing to visit during the day, then you've got a few more things you can do. Firstly, the tour of the Kelpies allows you to actually step inside the sculptures to see what they look like from the inside. This is pretty cool but to be honest, we wouldn't say it is an absolutely must-do.

During the day you've also got a few options for eating including the main cafe, as well as The Horsebox which serves up pizza. 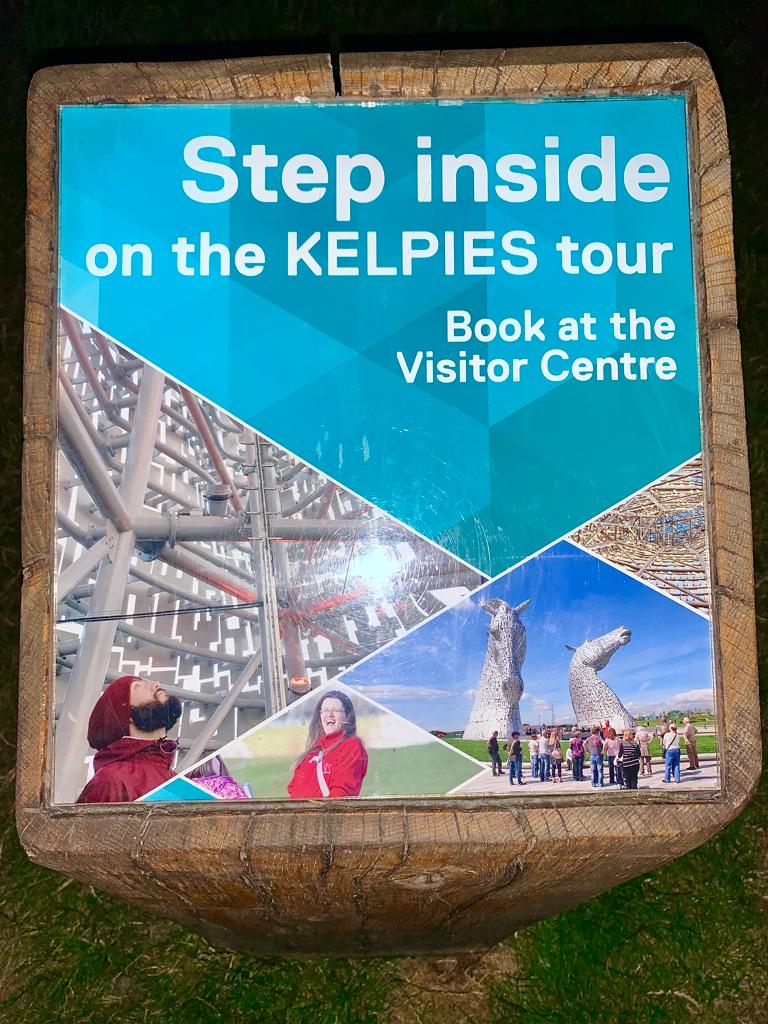 What else is there to be aware of during your visit?

Something which really surprised us is that the Kelpies are surrounded by quite a bit of open water with railings - the Queen Elizabeth II canal flows around the sculptures. If you're visiting the Kelpies at night then you definitely need to watch your step and make sure to stay well clear of the water!

You should also be aware that you can't drive your car right up next to the Kelpies. There will be a short walk from the car park of around 10 minutes, but we actually think this adds to the experience as the sculptures emerge from the distance.

Lastly, the Helix Park itself is pleasant to wander around and you can actually spot quite a lot of wildlife there, particularly birds. If you're lucky and you're visiting during the day you'll maybe see a Grey Heron, a Buzzard, or even a Peregrine Falcon. Even if you're visiting at night you might see Swans swimming peacefully down the canal. 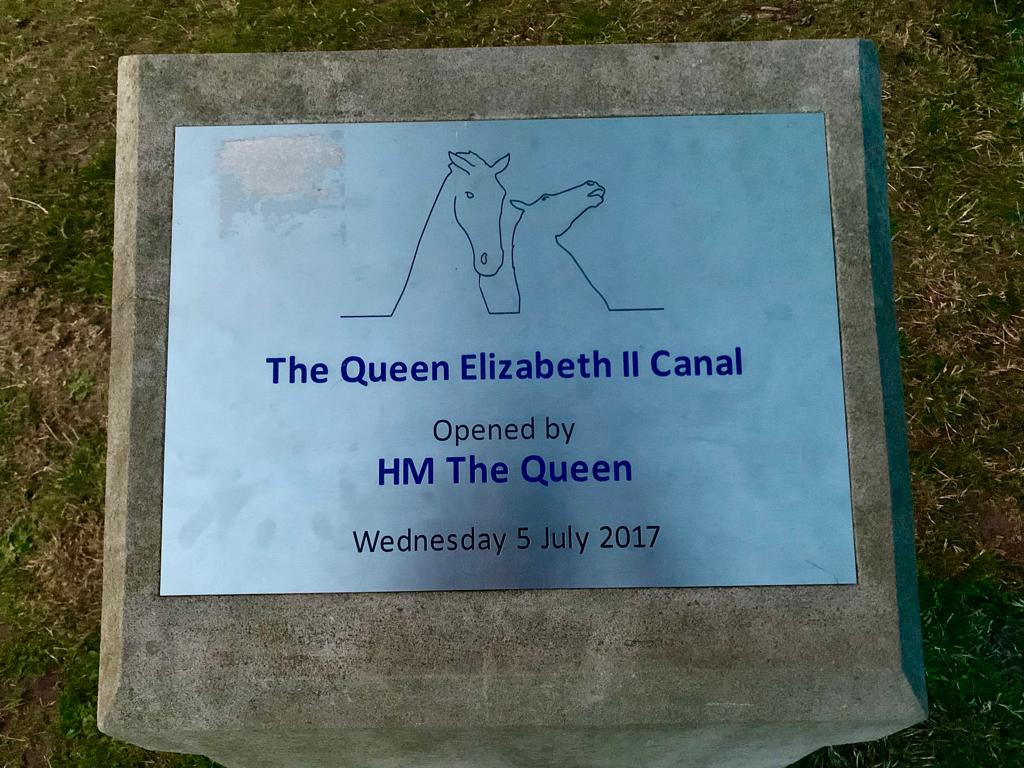 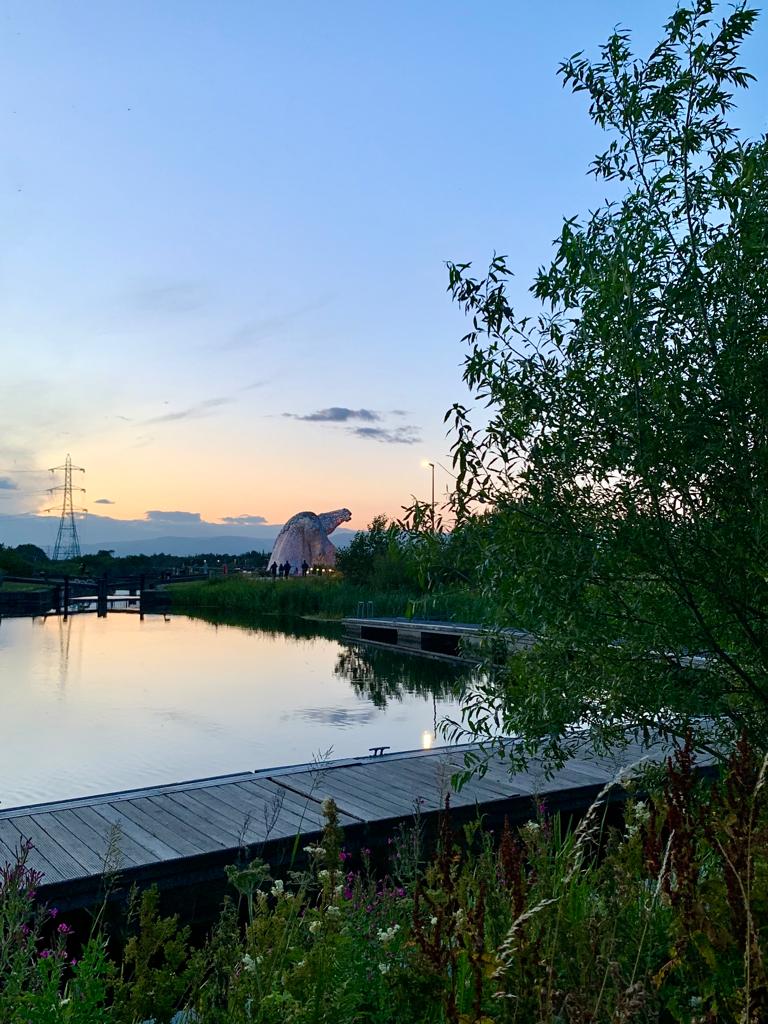 If you enjoyed this guide, check out our guides about other popular Scottish tourist attractions such as the North Coast 500 and Kintyre 66. We also have guides about the islands such as Arran, Jura, Eigg, and Mull.

A collection of interesting facts about the Kelpies:

One of the best things about the Kelpies is all the interesting facts associated with them, these are some of our favourites:
- The statues stand at over 30 meters tall (100 feet)

- In the first year of opening, more than 1 million people visited the Kelpies

- The best thing about the Kelpies is that it's totally free to come and admire them
- The Kelpies are the largest equine sculptures in the world
- Each sculpture weighs over 300 tons
Kelpies were named after water Kelpies which are a mythical creature from Scottish folklore.
They were said to be shape-shifting beasts that could take any human form
- The Kelpies are accessible 24 hours a day, and at night they're often lit up which is especially impressive
- 128 individual metal plates were used to create each monument
- Incredibly, the monuments were completed in just over 90 days
- The Kelpies have names! They're called Duke and Baron, named after 2 Clydesdale draft horses with the same names. Duke pulls a dray in a park in Glasgow as his day job, and Baron is a former rescue horse who was  rehabilitated by the charity World Horse Welfare. We're not sure which one is which though! You'd have to ask Andy Scott that question. 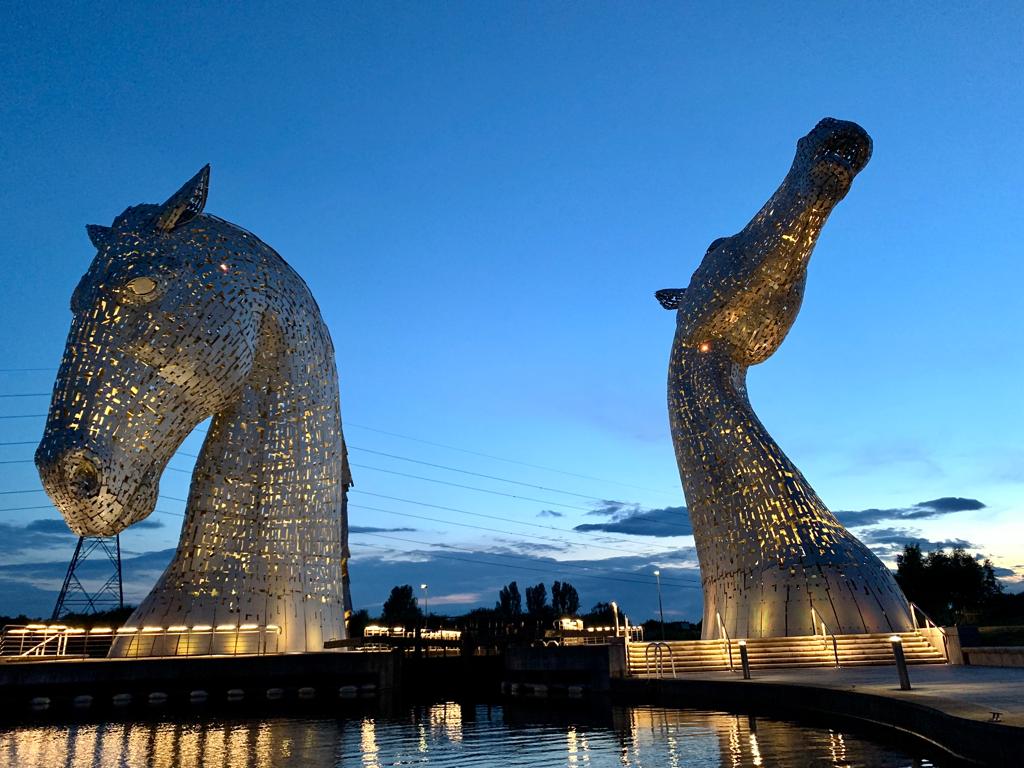