The more that you look into it, the more you can see that mother nature has produced some rather amazing substances that help our bodies thrive.

After some digging (not literally) we came across one of the most overlooked, yet powerful, natural remedies which many have been cringing at for years. Yes, that well-being trend is fungi (or mushrooms).

For most of us, mushrooms are weird, squidgy, and squashed things that you stay away from because they look, funny and could be harmful. At a closer look, these sprouting fungi are way more beneficial than what meets the eye! The world of fungi is truly a rabbit hole of amazing discoveries that are not yet fully understood…. but let us start small today with one of the most popular medicinal mushrooms in the UK; Lion’s Mane.

So today, we are going to be discussing the benefits of the Lion’s Mane Mushroom (also known as Hericium Erinaceus in gibberish) and why these fungi are particularly special?

What Are Lion’s Mane Mushrooms?

Lion’s mane mushrooms are unlike any mushrooms you can buy at the supermarket- they are large white shaggy growths that look a lot like a Lion’s Mane (hence their name). They grow in spines and are often found on hardwoods in England, North America, Europe and Asia. The fungi have been used for traditional medicinal purposes for centuries in India, China, Korea and Japan but until recently have been largely unknown to western well-being.

The Lion’s Mane mushrooms themselves are often eaten raw (it apparently tastes like crab/lobster), cooked, dried (and ground into a powder) or steeped as tea (huge tradition of medicinal tea in China). What is most interesting to us, is that the Lion’s Mane extract is sold as an over-the-counter health supplement which is mostly to do with the bioactive substances found in the mushroom; many of which can have profound benefits to our cognitive function, our heart health, and digestive system. 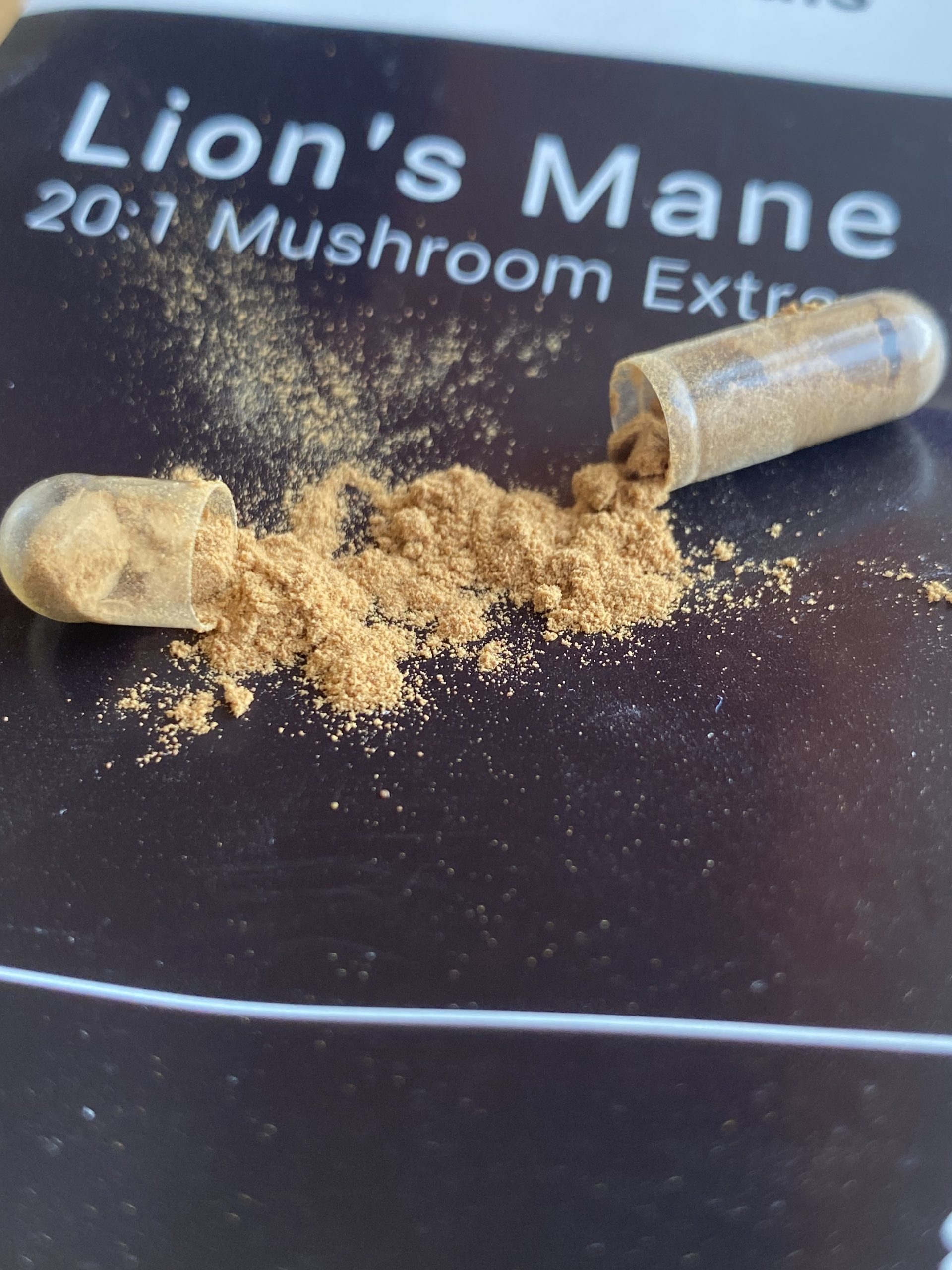 So, What are the Benefits?

One of the most interesting and widely-studied benefits of Lion’s Mane mushroom is it’s potential to enhance cognitive function and brainpower. Although there have been very few human studies, it was found that the mushroom acted as a nootropic and improved memory, recognition, and cognition for mice.

It has been found that there are two compounds that are produced in Lion’s Mane which stimulate the regeneration and growth of neurons, and help the production of new pathways in the brain: Hericenones and Diterpenoil Erinacines.

Our cognitive function would not be the same without them. Our brain is like a muscle- the more you use your muscles the stronger, faster, and more resilient they become; our brain works in a very similar way during a process known as Synapse Potentiation. This is the process of the pathways in your brain growing and becoming stronger each time they are used. It is why our ability to learn, solve complex problems and ability to remember details improves when we push our brainpower.

In addition, there have been links drawn between Lion’s Mane as a potential preventative measure to degenerative brain issues in older adults. A study found that cognitive functionality and memory was improved for elderly adults while taking a Lion’s Mane supplement, and then disappeared when the supplement was stopped.

The more you learn about the body, it seems the less you really know. We often take for granted how complex our body actually is. Our nervous system is such a delicate and important network that sends signals from the brain, to the rest of the body.

While there have been almost zero studies for humans, animal studies have shown that a high dose of Lion’s Mane extract could potentially aid the repair, and growth of nerve cells. The recovery from a nerve injury was found to increase between 23-41% in rats.

It is hard to say whether this actually translates into humans, but the findings are certainly very interesting and bring up a lot of questions.

A happy gut is a happy body. It is a fact. The old saying – ‘Listen to your gut’ – has never had so much forgotten meaning. It is an absolute fact that our gut plays a huge role in the well-being of the rest of our body, and our mind. After all, it is where our body gets the fuel to survive.

Arguably, the cause of a vast array of modern illnesses is caused by our diet of overly fatty, salty, sugary, and processed foods.

A number of studies have looked into the benefits of Lion’s Mane supplements, for the digestive system. They found that the mushroom may help to protect our natural ‘good bacteria’ balance and the health of our gut. Lion’s Mane has been found to reduce the levels of a bacteria called H. Pylori which is a known cause of stomach ulcers. The mushroom extract was also found to protect against alcohol-induced ulcers during animal trials. Interesting, but still better things to come.

There is also speculation as to whether or not Lion’s Mane Mushroom can actually reduce inflammation in the lower digestive system, helping many cope with intestinal and bowel problems. The jury is still out, but some studies have shown than a ‘Mushroom Complex’ (containing lots of mushrooms) can aid against inflammation in the lower digestive system.

Finally, the Mushroom has also been liked to improving our body’s response to pathogens that enter our body in the nose, and mouth by increasing the activity of our digestive immune system. This is found to be due to its ability to keep our gut bacteria balance happy. In animal trials, a mouse infected with the deadly salmonella bacteria lived up to 4 times longer while given a Lion’s Mane extract.

It is important to note that most of the studies included here were not completed on humans; more research is needed!

Every single day of our lives, we experience some level of inflammation. It is a completely natural part of our body’s immune response to potential damage.

Research has shown that Lion’s Mane has the fourth highest levels of antioxidants out of 14 mushroom species studied and is recommended as a potential antioxidant supplement. While the benefits of Lion’s Mane in humans is still undergoing research, studies in animals have been found to be very promising.

As part of its ability to help regenerate cells in the hippocampus (deals with mood in the brain) and it’s anti-inflammatory potential, Lion’s Mane is seen to have mild benefits for improving depression and anxiety. While mice have been the only test subjects for major studies, a human study had found that the mushroom extracts had lowered the anxiety and irritation levels in menopausal women. In animal studies, it was found that the mushroom made changes to the Hippocampus, which when dysfunctioning is the cause of mood disorders.

Mental health is a very serious subject to discuss for us, and we take almost everything with a pinch of salt. What we certainly know is that the benefits Lion Mane holds for our brain function makes total sense. Anecdotal evidence has suggested that regular consumption of Lion’s Mane has lead to a ‘greater clarity’ in mind. While once again, human studies need to be extended, the benefits of Lion’s Mane on mental health could be a huge discovery in regards to natural well-being alternatives.

Lion Mane extracts have been used in traditional remedies for centuries, so it is fairly safe to assume that the mushrooms are not harmful to humans at any level. Even in high doses, there is no evidence that there can be a toxic or harmful buildup in our body – in saying this, detailed human studies need to be done to discover the real effects of a high dosage.

There are however, a few groups of people who need to be careful when consuming these mushrooms; like all fungi, there is a potential for an allergic reaction. So if you have a sensitivity to mushrooms, you should consider avoiding Lion’s Mane.

For the same reasons, anybody who suffers from a respiratory condition (like asthma), or a bleeding issue should speak to a medical professional, or avoid the mushroom. This advice also extends to those who are nursing or are pregnant, have low blood sugar levels, and those who are due to have surgery.

From what we can find, some people experience nausea & vomiting, diarrhea or a rash.

There are also no known drug interactions when taking Lion’s Mane.

Across the board here, human studies to determine the benefits of Lion’s Mane are thin, however, we can say for certain that the mushroom has been a key feature in plenty of traditional remedies. So while the jury is still out on whether or not the Lion’ Mane benefits can be substantiated, we know for sure that the mushroom is pretty damn good for our health.

The same goes for the Lion’s Mane side effects – it seems that every experience may be different, and based on either a sensitivity to mushrooms or personal experience.