There are a few amazing things in the world that very, very few people in the UK (or the world) know about. One of them is the impressive Ol Doinyo Lengai – the Maasai Mountain of God. This year, COVID gave me the much-needed reason to throw caution to the wind and start ticking things off my bucket list. I travelled to Tanzania to see the animals.

On the way, I saw something that I would never forget. On the way to Lake Natron, we tumbled through miles of dusty hills and shaggy rocks in our invincible Toyota Land Cruiser. The landscape was arid, unfriendly and very dramatic. The rift valley toward over us on our right, and stretched out in front of us, with the top of the Ngorongoro Crater Highlands poking above the top. As the landscape became flatter, alone standing giant rose out of the earth.

The Maasai Mountain Of God

Ol Doinyo Lengai is impressive on its own – but the more you know about it, the more impressive it becomes.

The towering giant is an active volcano (yes, completely active) and is situated just off the southern end of Lake Natron and sits proudly in the middle of the Gregory Rift. The name ‘Ol Doinyo Lengai’ roughly translates to ‘Mountain of God’ and (according to my Maasai guide) is central to the religious beliefs of the Maasai tribe.

It stands at 3,188m high and constantly seeps a flow of natrocarbonite lava which leaves white silt flowing down the side of its peak. This volcano is unique in the world of volcanos as the molten lava is much cooler than other volcanos, meaning that it looks black in the sunlight (rather than glowing red). The lava is unstable so weathers very quickly, turning from black to grey. This is the reason for the peaks white stains.

The volcanic ash is a massive part of why this part of the world is so very special – and why the surrounding area flourishes with wildlife and plant life. When you are close enough you can hear the mountain ‘talking’. 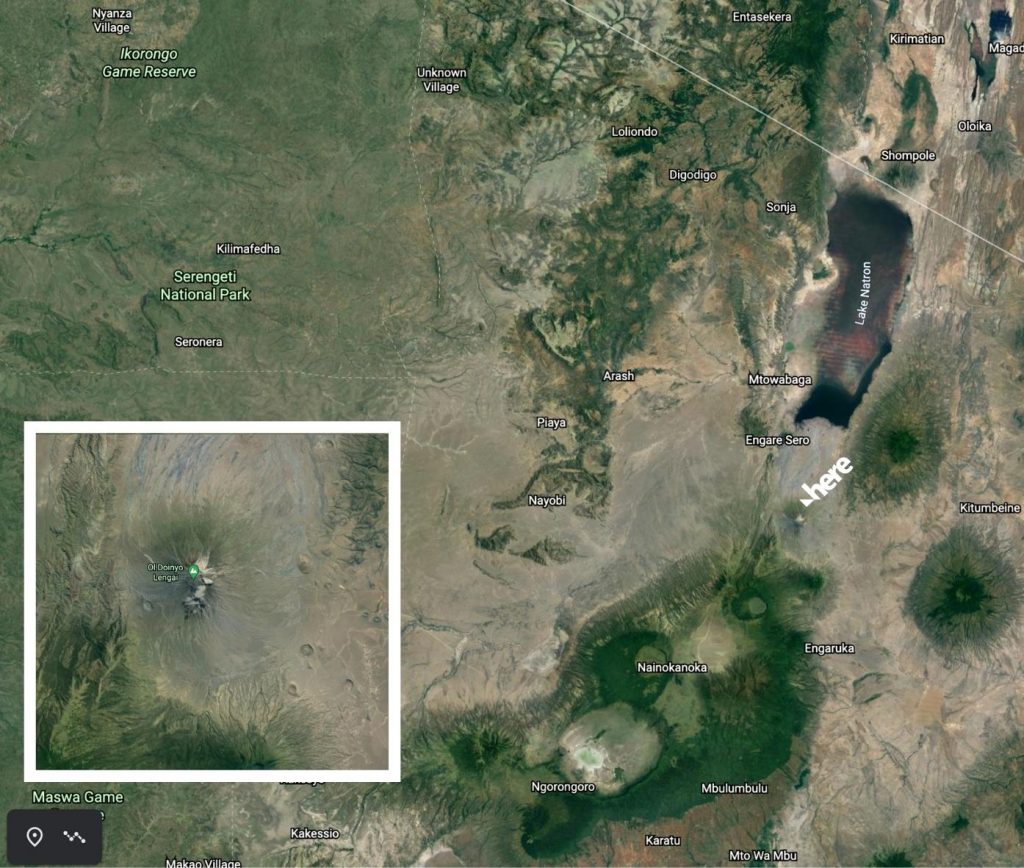 What the Maasai Believe

If you’re unsure about who the Maasai are, then rest assured that you have seen them before. They are a nomadic tribe in east Africa who inhabit northern Tanzania and southern Kenya (the top right of the picture above). They are famous for their tribal dress, impressive features of endurance and their welcoming, friendly culture. The guide with us was Maasai and knew almost 4 languages and anything you need to know about the local area.

He explained that Ol Doinyo Lengai is where the Maasai pray – and ask the gods for favours. For instance, if the rains are late, or there is a sickness, a group of Maasai will travel to the top of the volcano where they will perform prayer and ritual. When the ritual is complete, our guide said, the gods return in kind.

It is clear that this mountain is very special to the Maasai.

I have to be honest – I didn’t do the Ol Doinyo Lengai hike that tourists are welcome to climb the volcano with a Maasai guide. I wasn’t at all scared of climbing an active volcano, I just didn’t have the time. I will return to climb as soon as I am able!\

I am unsure how much the Ol Doinyo Lengai hike costs, but it is fairly easy to negotiate a price when you are in the country. The hike takes roughly two days to complete. The first day takes you most of the way up the mountain, where you camp for the night. In the morning, you complete the rest of the trip to reach the peak at sunrise. If you’re lucky, then you get spectacular views across the rift valley, across Lake Natron and into Kenya. That is a hike worth the trouble.