If you’ve ever been to Edinburgh – or Scotland in general – you’ll be well aware that the country produces some spectacular alcohol. Your mind may take you to whiskey, but I am here today to tell you about Steward Brewing from Edinburgh, who brew beer.

Edinburgh is about an hours train ride from me and I go regularly when I need a change of scenry, to see friends and to enjoy the budding food culture there. On my mist recent visit, a local pub was selling their Pentland IPA, and it was so popular with the crowd in the pub that the cask ran out. It inspired me to take some cans how with me and write a Strewart Brewing review.

Based in the story of the website, the company was started in 1998 by Jo & Steve. A married couple who’s imagination was ignighted during a trip to Boston – arguably the home of craft brewing.

In 2002, things got serious, and the (until this point) home grown enterprise moved to Edinburgh to professionalise their set up and start something that would today be one of the biggest (and in my opinion) one of the best breweries in Scotland. Their newest unit is a wonderfully colourful unit which looks over the pentland hills – and even has its onsite pizza place. It is a bit of a mission to get to, but you can easily get a bus from the centre of town just outside the industrial estate.

The company can be easily found around the capital – in bars, shops, supermarkets etc.. – and around the northern half of the UK.  From tasting (many) of the beers, it is clear to see why the company have been awarded with over 145 awards including the Scottish Beer Awards, SIBA Awards, World Beer awards and more.

Strewart Brewing have an enormous range of beers available. From Dark strouts and porters, to hazy citrussy IPAs and creamy smooth golden ales. All the way to sour fruits and experimental batches that come and go. Personally, I like to drink an IPA when I have a pint, but the Edinburgh Gold Ale is a very close second.

You can find their whole range via their website – this page shows most of the range they have on offer.

The Beer that I found the most enjoyable (for my tastes anyway) was their New Relic Mosaic IPA – and a beautiful can to look at and hold.

A Mosaic IPA is slightly different other pale ales – while the APA may blow your mouth open with grassy hops, the Mosaic is designed to be more ballanced with a malty background, smooth finish and still retain the hoppy aroma which makes a hoppy pale ale so appealing. This is potentially why I loved the New Relic Mosaic IPA as it had a fragrant hoppy flavour, with deeper smoother notes of forest fruits – the website mentions stone fruits and blueberries. At a 5.6% alocohol volume it has some kick to it too! 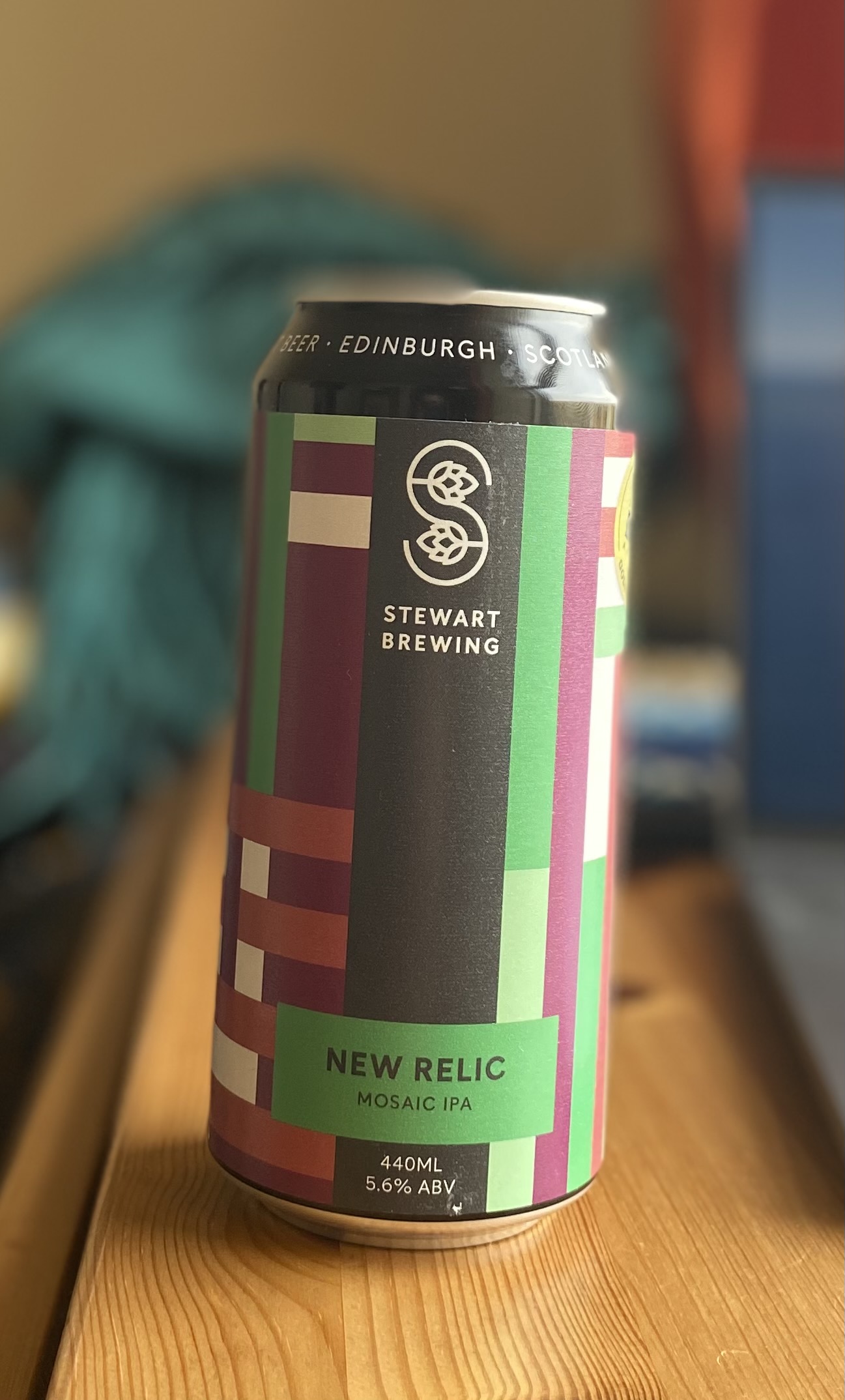 If this sounds great – go to Edinburgh for a pint, or you can pick up a can via the website for £2.60

The Edinburgh Gold Pale Ale was another favourite of mine – although comepletely different. It was rich, smooth, flavouful and hoppy. Often with Ales (usually served warm) they can be very boring but this ale had a sophisticated flavour that changed with every sip. It was fruity, sweet, hoppy and bright – yet dark and rich with a wonderful creaminess from the head. I have to say that it was so delicious I may have had 4. The pint glasses are pretty beautiful too.

The Alcohol content is slightly less than the IPA at 4.8% and a bottle will set you back £3 on their website. Best make an excuse to head to Edinburgh for a pint.

Finally – the Pentland IPA was delicious. It was very unusual and I could not pin down the style of Pale Ale it was. According to the website it uses a muxture of European and American hops which give the beer a bite – it is that bite that makes you go ‘ahhh’. The beer was citrusy, complex and bitter enough to smack your lips in delight.