Scotland is known for its unbelievable beauty, dramatic rocky outcrops and stunning mountains we call 'Munros'. It is also not a secret that Scotland is considered one of the best driving countries on this very small planet.

The most famous driving routes in Scotland are the Kintyre 66 and the North Coast 500 - the second of the two is 516km (830km) from end to end and is a whirlwind tour of Scotland for petrol heads and sightseers alike.

The route starts and ends at the famous Inverness Castle and heads up around the north tip of Scotland - passing through Dingwall, John O'Groats and back down the west of Scotland towards the Isle of Skye. The route offers unbelievable mountain views, stunning historic castles, white sandy beaches, whiskey and gin distilleries, an opportunity to see the most northerly point of the British Isles and to cross the Kylesku Bridge over Loch A'chàirn Bhàin.

There is no 'right' way to go on the roads and it depends on what things you'd like to see when you're there (more on that later). There are lots of little stop-off points, detours and parts you like more than others, so the route is up to you.

This is a map of the North Coast 500, starting from Inverness. The most common way to travel is along the East Coast through Dingwall, to Dornock, Helmsdale and Wick. Then head back down through Thurso, Tongue, Kylesku, Ullapool, Poolewe and Gairloch. From the base of the NC500, it is also very possible to add the Isle of Skye to your route - which offers spectacular views. 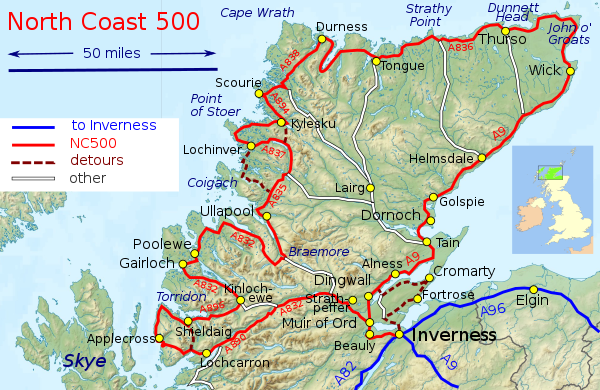 How Do You Travel the Route?

One of the things you need to be very aware of before travelling is the fact that the route is hectic, and is known to be particularly dangerous at points.

The NC500 is particularly popular with campers, converted vans, motorcyclists and tour buses/ private hires. It is possible to take a car but it may be better to let somebody else take the wheel while you enjoy the view.

We've done a little bit of research and put together enough to make what looks like a very achievable North Coast 500 accommodation package that you could plan, and book in advance.

There are more than a few that we may not have included, but we wanted to make sure to give all of the ones with good facilities and good reputations.

There are also a few that can be used for launching points to across the whole of the highlands. So you are able to stay in one hotel for a number of days of sightseeing.

We have included Lairg here for this reason - it is a central town, with some spectacular views and great facilities. All while being close enough to everything worth taking a day trip for.

What is there to see and do on the route?

Other Points of Interest