The best education you can buy is travel. The best education I have had is when travelling through Africa, specifically Tanzania. East Africa has become my favourite destination to visit - partly thanks to the unique and diverse landscapes, the friendly culture and amazing food.

The most magnificent experience I had was travelling to the Ngorongoro Crater and the surrounding conservation area (including Karatu). I had the time of my life, and I would love to share with you why you should travel there.

About the Ngorongoro Crater

The Ngorongoro crater and conservation area is a UNESCO World Heritage site that sits 110 miles west of Arusha in Tanzania. Alongside being one of the most beautiful natural wonders of the world, the crater is home to thousands of animals including the Big 5. The crater walls serve as a physical barrier which makes the wildlife that lives there extra interesting.

The Ngorongoro Crater itself is the world's largest, and most intact, Caldera; an empty volcano cauldron after the volcano has exploded or collapsed. Thankfully, nobody was around when this enormous explosion happened.

It is estimated that the catastrophic eruption took place three million years ago and the disruption is still visible today as far away as the Serengeti. The crater is currently only 1800m above sea level and between 10-12 miles across. Experts estimate that the volcanic mountain that stood there before must have been up to 5,800m tall - not far off Kilimanjaro.

Now, the crater is a very well protected Wildlife Conservation area which became protected in 2009. Although there are settlements of the Maasai tribe around the conservation area, a mass displacement of the Maasai was enforced by the British Colonial Government in 1959 to establish the network of national parks (Including the Serengeti). The argument was to protect the wildlife and so research into the crater's oddities (such as the Olduvai Gorge) could take place - but we're not too sure. 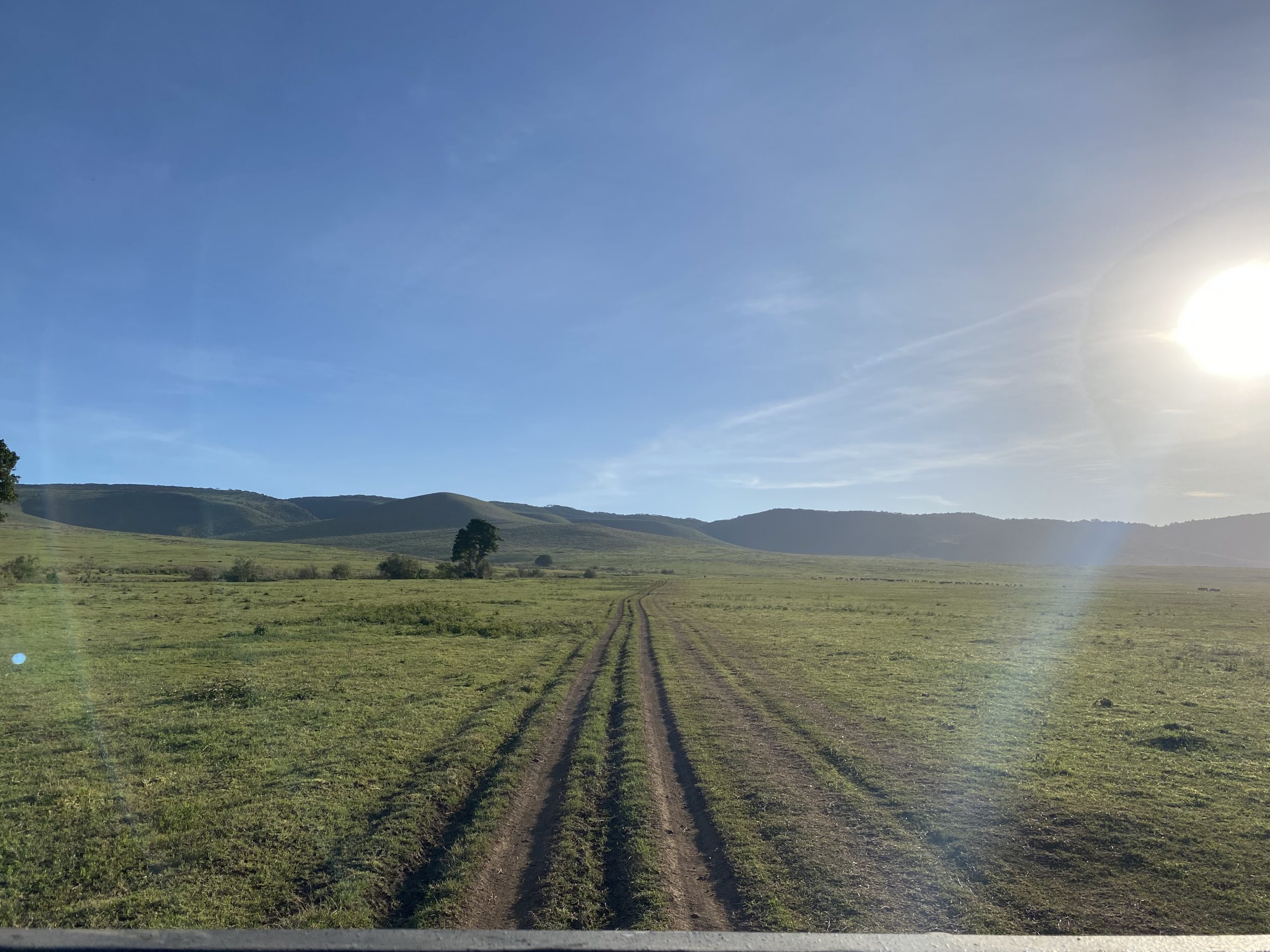 As you are here, potentially, to travel to the conservation area it is absolutely worth talking about the 1 day Ngorongoro Crater Safari. After all, unless you're a scientist, it is what people do there.

While other National Parks are beautiful in their own right, their size can make it very difficult to spot the animals. I have personally been driven around for 4 hours (after 4 hours of sleep) in the cold landscape and have seen nothing but Wildebeest in the Serengeti, or sand near lake natron.

The best part of a Ngorongoro Crater Safari is that you can do it like a wildlife Disneyland; everything is in one place and can be explored thoroughly in a day. The caldera walls surround the crater floor and provide a natural barrier which protects the animals - and keeps many of them inside. It is well known that the family of lions in the crater are significantly inbred as very few new lions enter the gene pool.

A Ngorongoro crater safari can be included within a longer safari tour which will include the other national parks and natural wonders in Northern Tanzania, or it can be done as a 1-day safari.

The south border of the crater is an area called Karatu, which is home to plenty of beautiful coffee plantations (with guest houses), hotels and lodges (including the very famous Gibbs Farm). These lodges are much more affordable than the ones in the crater highlands - and you are still within a 40-minute drive of the Crater itself.

If you are to ask my advice? I would always recommend camping in the crater highlands in one of the many public camping sites. The Ngorongoro crater lodges are well provisioned (much more than the Serengeti) and comfortable: there is little chance of bumping into an animal in the middle of the night and the climate is much cooler than Lake Natron.

Which animals are in the Ngorongoro Crater? 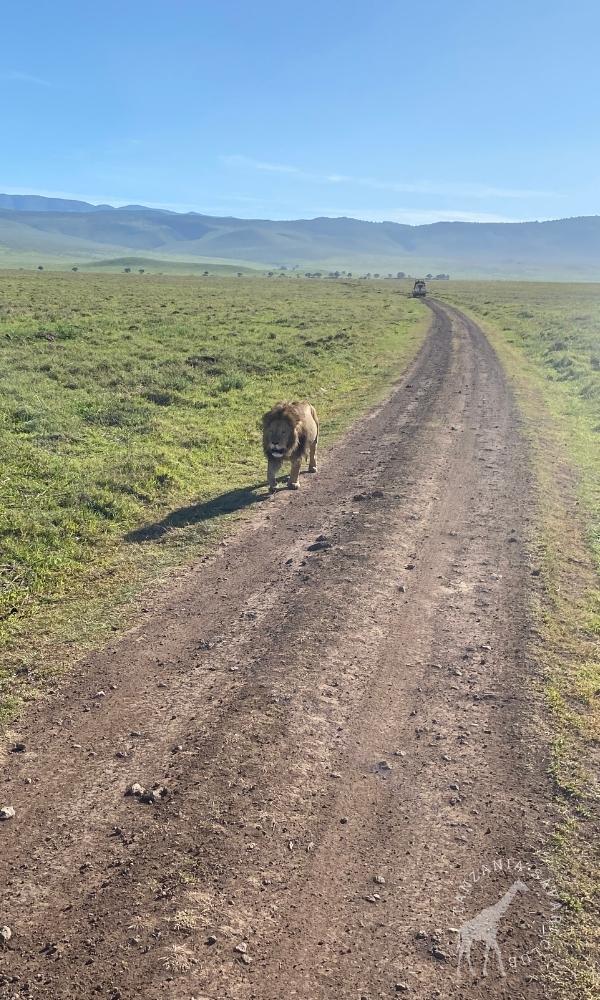 The main reason why I recommend a Ngorongoro Safari is simply down to how easy it is to see the big 5. They live within the crater and are never too far away from the roads (where the trucks can travel). I once saw 4 (Elephant, Rhino, Buffalo, Lion - sadly no Leopard) of the big 5 together at once- it was an unbelievable experience.

There are an estimated 25.00 large animals in the crater. These include Lions, extremely rare Black Rhinos (often east to spot as they are followed by armed guards), Hippos, Buffalo, Hienas, Hogs, Zebra, Giraffe, Bucks, many flamingos, Crocodiles, Cheetah, Leopard and the famous Giant Tusked Elephants. These are just a few of the amazing wildlife all around you.

The Ngorongoro crater's wildlife is particularly interesting and different to those you'd find elsewhere - simply as the crater offers a safe and fertile environment for them to survive. A great example is the famous Nogorngoro giant tusked Elephants. Elephants sadly do not usually die of old age, they tend to die of starvation. This is due to their teeth being worn down by the harsh branches and trees where they get their food. Things in the crater are different. They are able to eat soft, flush vegetation and therefore live much longer, and grow significantly bigger than elephants outside of the crater.

Truly, these animals are enormous!

The Best Time To Go?

There are conflicting thoughts on when is the best time to go to the Ngorongoro crater but the 'party line' is during April and May during the rainy season - this is because there are fewer visitors and the landscape becomes lush and green. Both of these things give you a much better opportunity to see the animals and get the fullest of experiences.

I travelled during the summer which is the busiest and driest time - and the experience was still amazing. Our travels happened during COVID which may have had an effect on how many tourists there were.

Regardless, the best time to go to the crater is NOW! Do it before you can't!