There is something great about a cold beer after work. It is cold, refreshing and just fills a hole in your soul that a soda doesn’t. The drawback is that beer contains alcohol and isn’t the best for your health. So, we’ve been testing non-alcohol beers to help reduce our alcohol intake without needing to let go of that ‘ahhhh’ moment.

Of all alcohol-free beers the Erdinger Weissbrau Alkohol Frei may not stand out, but once you try it, you may not look for another one so quickly.

Who is behind Erdinger Weissbrau?

Erderinger seem to have been around forever and they almost have. They have been producing Bavarian beer for over 130 years and stand out as one of the most successful German beer producers globally. Despite the global success, the company values their heritage and continues to follow the strictest quality standards from its homeland.

The Bavarian Purity Law overlooks the quality of the wheat and barley malt, the hops and the clean water from deep wells.

What do we think of Erdinger Alcohol-Free Beer?

As alcohol-free beers go, the Erdinger beer is by far one of the best. Non-Alcoholic beer suffers from something missing – something that is hard to put your finger on when you’re drinking it. Is it the flavour? The bite of the alcohol? or the way that alcohol makes you feel? Oftentimes, for the price you pay, you may as well just accept that alcohol is needed in beer.

Hope has been restored with the Erdinger Alcohol Free Beer – it was completely satisfying, truly delicious and refreshing enough to give the ‘ahhh’ moment we all want from a fresh cold beer.

What we think sets this beer apart is the culture of brewing which Erdinger is so proud of. Germany is well known to be the producer of the best beers in the world, and the laws surrounding brewing are fairly extreme. They have worked long and hard to ensure that the standards of the German Wheat Beer industry are maintained.

The beer has a sweetness from the malt and hops, a complex of savoury notes and just enough bitter citrus from the hops. It is fair to say that compared to the alcoholic version of the beer, the Erdinger Alcohol-Free is still missing something, but if I’d been told this was a new beer full-alcohol from Erdinger I’d believe them. 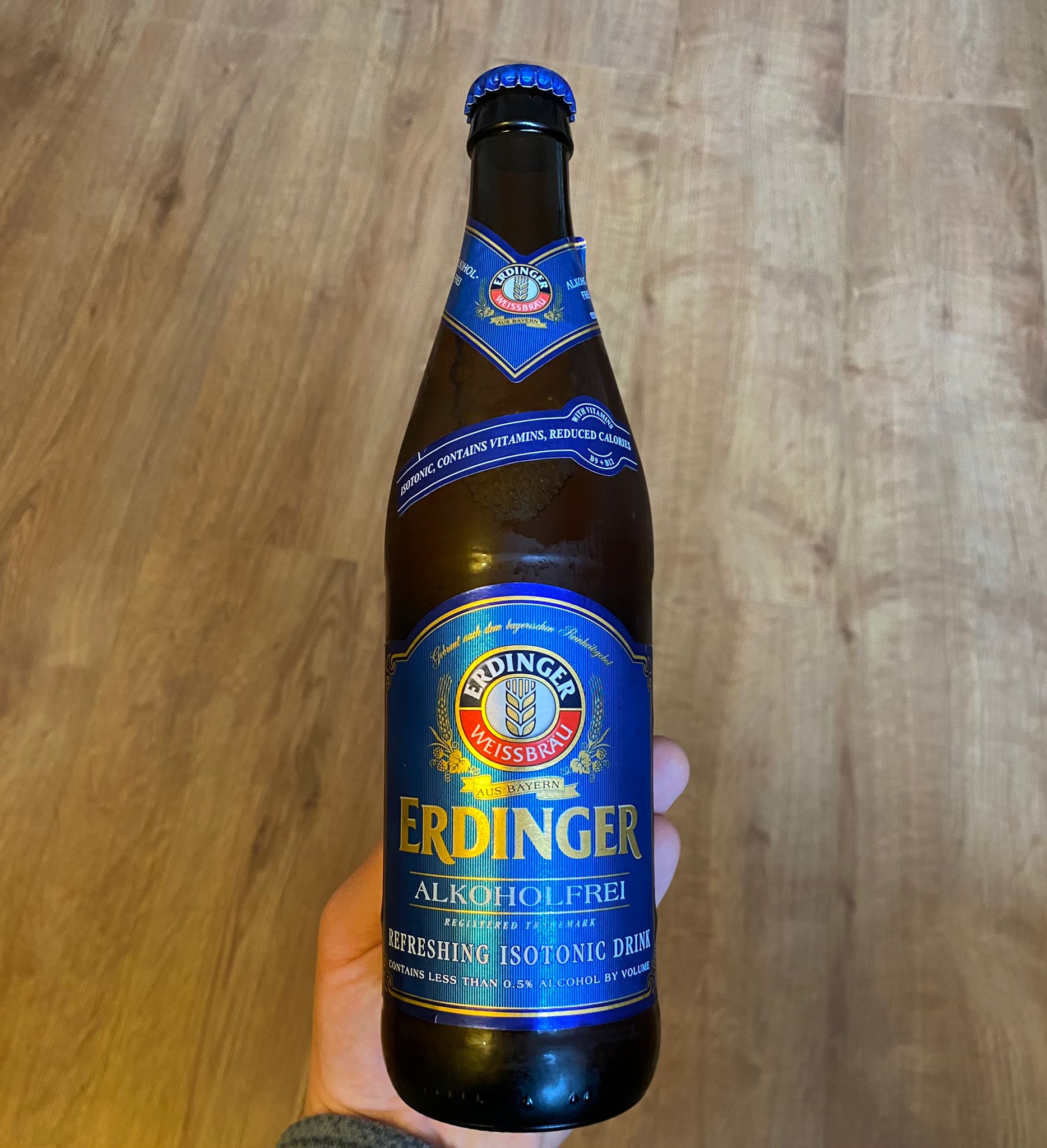 This beer is also advertised as an ‘isotonic drink’.  This means a liquid with the same osmolarity of body fluids and is the most effective way to rehydrate. Mostly you’d associate isotonic drinks with sports. It is also advertised as a source of Vitamin B9 & B12 – all the more reason to drink one.
In terms of calories, the Erdinger alcohol-free beer contains 125 calories per 500ml (the size of the bottles). When compared to other alcohol-free beers the calories are a little on the high side.  Lucky Saint (53cl per 330ml)and Heineken 0.0 contain a little less. But what you gain in flavour, you also gain in calories.

Overall, we’re really happy with Erdinger’s 0% alcohol beer for a number of reasons – it comes in a bigger bottle than other beers of a similar value, and tastes significantly better than 90% of other non-alcohol beers we have tried