Acne is a strange and mysterious skin condition. Despite dermatologists studying the condition for decades, there remains a distinct lack of concrete advice about what to do if you want to reduce your acne. Skincare companies will be quick to tell you that the surefire way to treat acne is with a cream or lotion, whereas some health professionals remain adamant that the best way to treat acne is to simply leave it alone and let nature do its thing.

But the one thing that every person suffering from acne has in common is an imbalance of some sort. Whether this is on the skin itself or within the body differs from person to person. More often than not, that imbalance involves a lack of vitamins such as Vitamin A and D. This is why in America many young people are prescribed drugs such as Accutane, which is essentially a naturally occurring derivative of Vitamin A. Accutane can often sort out the acne problem for many people (it's probably the most popular acne treatment in the world), however it also has many side effects.

So then, we've established that acne is caused by imbalances and that in the States, they sort out acne by giving people a derivative of Vitamin A. Well, let us introduce you to Cod Liver Oil - the natural super supplement that is packed with Vitamin A and Vitamin D, plus a host of other amazing nutrients such as healthy fatty acids. Many people have reported skin improvements simply from consuming Cod Liver Oil daily, so we thought we'd dig into why this might be helping so many people with their acne. Let's get into it:

Why is nobody talking about the benefits of CLO for acne?

If you want our slightly conspiratorial answer, it's because there is a massive industry around acne drugs such as Accutane. According to the LA Times, Accutane is one of Roche's best-selling drugs, making them about $200 million a year. Meanwhile, Cod Liver Oil is very cheap to produce and buy and there isn't really any single company that could ever corner the market for this supplement. A jar of Cod Liver Oil capsules that lasts you about a month won't cost more than £10, so it's a cheap, readily available supplement. Not the type of thing pharmaceutical brands like to promote, generally speaking.

Is there any evidence that Cod Liver Oil actually works for acne?

There haven't been a huge amount of studies on the effectiveness of Cod Liver Oil for acne, and we think this is for similar reasons to what we mentioned in the last section - basically, it isn't in the interest of many large companies to demonstrate and promote the benefits of Cod Liver Oil for acne. However, there is a study from 2012 that you can read here. This study looked at the effects of fish oil supplementation on inflammatory acne, and the study concluded that:

"There is some evidence that fish oil supplementation is associated with an improvement in overall acne severity, especially for individuals with moderate to severe acne."

This study wasn't exactly comprehensive - it only involved 13 people and it didn't talk about what type of fish oil was used, plus it only last for 12 weeks. So although we'd love to see a bigger study on the effects of CLO for acne, the results from this study are quite promising.

What CLO is best to use?

In terms of what Cod Liver Oil to use, we'd go for something from a trustworthy brand and ideally produced in an ethical manner. We've been using this one from Holland & Barrett (pictured) which is pretty good and not expensive. You can choose to take capsules or just chug the oil as it is, but we wouldn't recommend that (the taste is really bad). 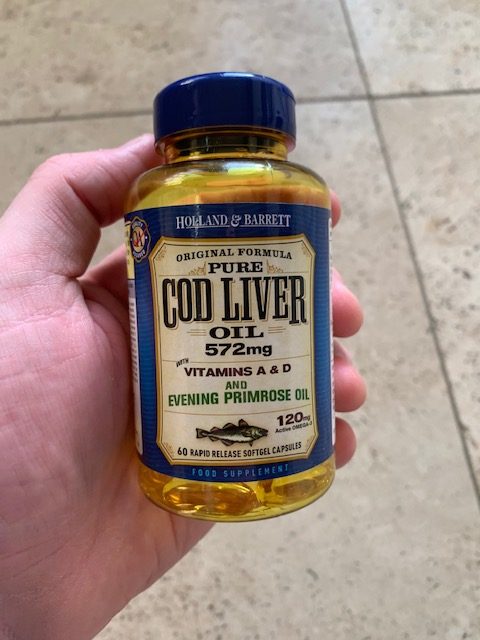 So it's clear to us that there is potential for using Cod Liver Oil to treat acne, but as with all supplements, you should consume a safe amount (use the recommended amount) and start slowly with it. We think there definitely needs to be some updated studies, maybe we'll do one!

A Comprehensive Guide to Gold Panning

A New Take on a Gypsy Martini Recipe

How to Make a Gin Mimosa Cocktail (Sour)