On a recent trip to Glen Feshie, I was lucky enough to meet a very well educated by a highlands local at the famous Ruighe-aiteachain Bothy. For those who are unaware, a bothy is a place to stay overnight in the highlands and is usually free. You’re likely to meet all kinds of people. These bothies are can be as beautiful as Ruighe-aiteachain or simply a place of shelter in the wilderness.

While I was there, the guy told me about the vegetation he was growing in his garden, which can be easily found wild in Scotland while trekking. Most of which I had heard of – rhubarb, wild garlic, potato, cabbage and something called Blaeberry. I was completely unaware of this berry until I got home to do a little bit of research.

So, let’s talk a little bit about it. 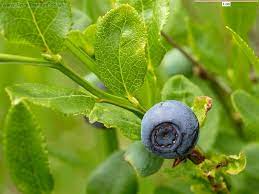 A Blaeberry is a plant that is important to coniferous and deciduous forests, and variations of it can be found across the globe. Those that are found in the UK tend to be in the northwestern mountainous regions as the plant likes to be above 1000m elevation. Even in southern Europe, the Blaeberry is found high in mountainous areas.

The berry itself is likely not to be something you’ve ever heard of before, but it is closely related to a Cowberry or Huckleberry and is also called a Bilberry, whortleberry (if you’re a fan of Roald Dahl) or whinberry. In Scotland, it is called a Blaeberry.

The Blaeberry is usually found in better-drained, acidic soil, under the shade of the canopy of trees. Therefore it is mostly found under heather (on the moors and flatlands where a forest once stood), or on the floors of pinewoods, birchwood and flora of the Caledonian forest.

Sadly, the Blaeberry is becoming much rarer thanks to the cultivation of sheep on highland pastures, and the deforestation of the highlands. If you are to identify the plant, then you should look for a shrub of around 2 or 3 feet tall with little blueberries (which turn from yellow to red in the autumn). The flowers of the plant look very much like bells and are often white with a pink tinge – like they have been put in the wash with a red sock.

It is safe to eat or cook with, Blaeberries and they are known as a good cure for diarrhoea and settling your stomach. They could be a great addition to some hot water for a sweet, floral cup of warmth – just remember your jetboil. Otherwise, you may take them home to make pies, jams and other sweet treats. Imagine a blueberry, but much softer, and juicer. Expect blue fingertips.

Mostly, though, the berries are a vital food source for the animals that inhabit the highland terrain – such as insects (bees, flies, wasps and others), birds (including the many varieties of grouse) and cattle.

Fun fact: Like pine trees, the plant also has a mycorrhizal relationship with fungi which means that the bush is provided with ammonia (made from nitrogen) and the fungi is provided with photosynthesized sugar. A perfect balance in nature.