The term ‘vegan’ has been thrown around a lot in recent years and it seems to have become a great marketing tool for businesses to bring in new customers. Vegan KFC  and Mcdonald’s are great examples of why?!

Full disclosure; while a few members of the team are vegetarian/vegan, I am not. We all agreed that I would write this post as somebody who is completely fresh to vegan food- with the additional purpose that I could learn more about it.

Outside of London, Edinburgh is quickly becoming the cuisine capital of the UK and foodies are flocking to the city to write blogs and film videos. It is just a ‘wee’ ride on the train so I thought, why not take a day trip and see what the city has on offer. The biggest trend for food in the UK is a fully vegan diet – and because I am in a new city, I thought that I would try something new.

There are a number of influencers who are based in the city and I made a list of recommendations so that I can try them myself. So, what did I think was the best Vegan restaurant in Edinburgh?

Almost everywhere you look, the Holy Cow is recommended as one of the best vegan cafes in Edinburgh. I was staying not too far away from the cafe and there was no excuse for missing this place out on my vegan adventures.

There are two Holy Cows in Edinburgh- one in the centre of town and the other is slightly off the beaten track in an old printworks and gallery. The latter is the one we arrived at.

The first thing I noticed on the menu was a Ruben Sandwich. I adore a Ruben so this was a real stress test of my willingness to give up meat and go vegan for the day. A Ruben should be soft, moist, salty and zingy – with a slightly crispy edge to the bread and a lasting creaminess from the cheese and mayo.

How could the Vegan Ruben at the Holy Cow compare when it doesn’t contain meat? Well, they use seitan pastrami and vegan mature cheese, alongside their homemade sauerkraut and pickles. I have to say, it was pretty damn good. While it wasn’t a full-on Ruben (in my humble meat-eating opinion), it was delicious in a very wholesome way. All the flavour elements were there, and the tanginess was really great. It went DOWN.

Otherwise, the cafe itself is delightful, airy and clean with a little patio outside. The staff were very friendly and it seemed like a place you could happily chill with a book for hours.

Vitality and Kynd is a relatively new establishment that popped up during the pandemic. It is situated just up the road from toll cross, after the King’s Theatre. You seriously can’t miss it.

What is so interesting about Vitality & Kynd is that not only is it one of the best vegan restaurants I tried in Edinburgh, but they have centred their food around hemp and cannabis. There is a big sign saying ‘cannabis’ on the window. I had no idea what to expect.

Thankfully, nothing illegal is happening there, but a lot of the food contains CBD along with hemp proteins and hemp oils which are naturally occurring plant-based omega 3 & 6.

I was able to enjoy a few things from the menu including a power-up smoothy, a coffee and a ‘Chicken’ Pizza.

The Coffee: I like to have my Coffee black with nothing else, so a milk alternative is never an issue for me. The coffee was very different from what I expected and I was told that it is brewed with Hemp tea leaves and other ingredients to give the coffee its floral, delicate flavour. It was beautiful.

Chick’n Pizza: As a non-vegan, I have to admit that I was very wary of anything that claims to be something that it is not. The Chick’n is made using whey protein and is spiced to perfection. It was juicy, succulent and had a little bit of bite. Often meat alternatives are mushy, but this wasn’t too bad.

I am a pizza geek and can tell a good dough when it comes. This pizza wasn’t traditional and there was a little bit of flatness, but it was crispy, flavourful and filling.  The pizza was finished with what looked like a salsa verde which finished the rich pizza with a bit of freshness. 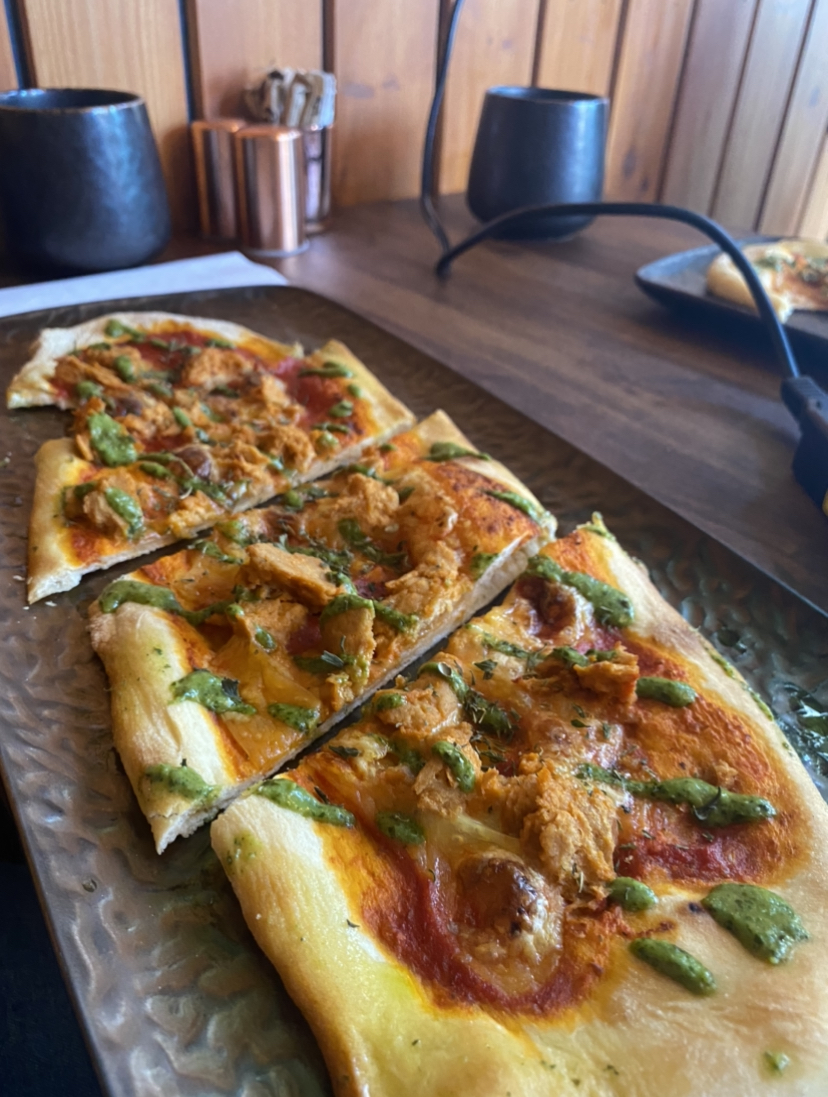 The only real big downside to Vitality & Kynd is the size of the place. It is very well furnished, has an amazing fee but it is very small. We wanted to get a seat and needed to wait for a little while. If you’re not into waiting then they have a hatch as a takeaway service with the Edinburgh Meadows a 2-minute walk away.

Another stop on the way was the famous vegan cafe, the Sly Fox. I chose this place as one of the recommendations because they have recently transitioned from being a vegan street food stall to owning a bricks and mortar establishment. I now that the transition can be hard so if they have managed it successfully, the food must be good.

I went for a classic; a goulash. The traditional Goulash contains some kind of meat (beef mainly) and is a warm, tomato sweet, spicy and fragrant stew that sticks to your ribs. With a nice bit of crunchy bread, you’ll not need to eat for a week. The offering from the Sly Fox was all of these things – in honesty, I didn’t notice that there wasn’t any meat at all. I was just munching away like a goulash gremlin. Bloody excellent.