As a few of our contributors are proud Scots, we talk about all things 'Scottish' (like Scottish Whiskey and Gin Distilleries). We write about tourist attractions, our fascinating Royal history and things that make us extremely proud to be Scottish. A huge chunk of our readers hail from across the pond in the USA and they are famously very proud of their heritage. Many of them end up reading your blog before travelling here, to their ancestral homeland.

A phenomenon we are well aware of is the process of becoming a Laird (Scottish Lord) or Lady via souvenir land ownership - we're also aware that the companies are subject to bad press and are accused of 'scamming' customers. Thousands of Americans spend millions of dollars a year on becoming a Scottish Lord/Lady that we thought we'd do some digging. We chose the two largest/most used companies and decided to see if they are legitimate or a complete con.

Let's get into it: are 'Established Titles' & 'Highland Titles' legitimate?

Who is behind the companies?

So, before we dig into the nuts and bolts of what the companies do day to day, it is worth exploring the people behind the companies. We wanted to understand whether these are legitimate business people, or shadowy entities hiding from the spotlight.

Established Titles are listed to be based in Huntly, Scotland and claim to have several small locations around Scotland that are used to plant trees and maintain the local environment. There are plots in: Ardallie, Aberdeenshire, Dunfermline (well, a village close by), Southwick, Dumfries and Galloway, Aberdeenshire, Wigtownshire. We did notice some online reviews mentioning that customers couldn't visit the land.

The company was established in 2020 by Katerina Kip, a Law graduate from the University of Durham, and a resident of York (it seems). It seems as though the young businesswoman cut her teeth in the business with intellectual property management, and venture capital companies from Hong Kong (Galton Voysey which is mentioned on the about us page).

We aren't sure whether Katerina has any strong ties in Scotland yet, but the Established Titles website does mention that she plans to make Scotland her home one day.

Without a doubt, Katerina's online presence is impressive - she is an exceptional entrepreneur. Highland Titles has a slightly different set-up, but similar. The company was founded in 2006 by Dr Peter Bevis, a Zoologist from London, and his daughter Laura. Another notable member of the team is Doug, the CEO, who is mentioned in media inclusions across the internet.

The company started by selling plots from land owned by the Bevis family in order to fund reforestation and repair their land which had been previously destroyed by deforestation. Their commitment has led to the development of 2 nature reserves where the company use its profits to maintain the grounds and fund rewilding projects.

It is possible for 'Lairds and Ladies' to visit the land they fund, and we believe there is documentation for the patrons on site.

What do you get from the companies?

What makes this all possible is a potential loophole in the Scottish Law of land ownership.

In Scots law, a land owner is entitled, Laird - which is the Scottish equivalent to 'Lord'.

While traditionally (and in English Law), a Lordship can only be purchased (for obscene amounts of money) or gifted to the recipient (usually for exceptional service to her majesty the queen or her government), in Scotland, the law allows any land owner to use the title.

The land purchased from Established Titles or Highland Titles is known as a 'souvenir' plot and is more representative than actually owning the land outright. This means that, while you own the land in law, you're not entitled to it. You cannot build on it, fence it off or make claims to it as a registered land owner.

In essence, what you're doing is 'investing' into the land to ensure it is maintained and protecting Scotland's wildlife; in return, you're able to refer to yourself as a Lord or Lady.

There are some nuances to this that we may not be representing very well- but it is simply down to our lack of understanding of the law. 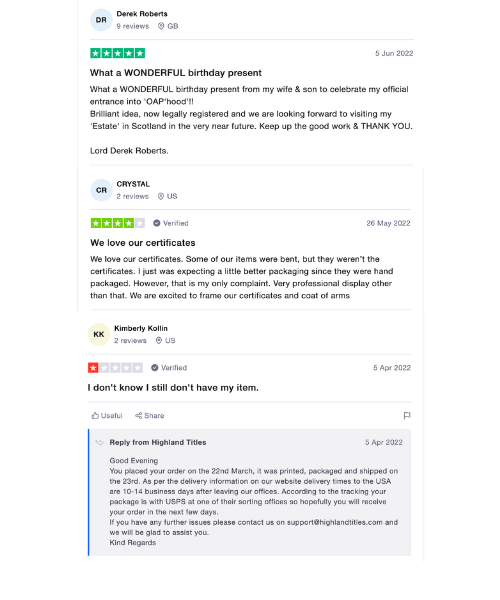 Prices: £40 ($50) per 1 square foot. You'll also get a welcome pack but some reviews mention it is poorly printed. 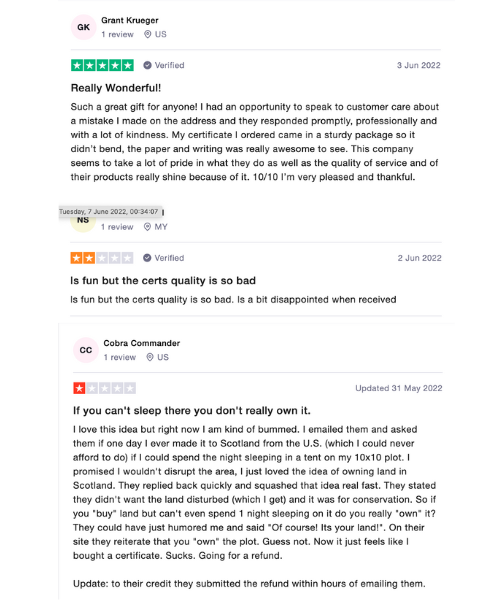 The short answer is yes, the long answer is 'it's complicated. There is nothing 'illegal' about the scheme but it does stand as a small loophole.

These small plots of land are referred to as souvenir plots, which have a long history in Scotland themselves. Through this loophole, anyone can buy a small plot of land in Scotland and refer to themselves as a Lord or a Lady

What is behind their legality is the 'Scottish Law of land ownership' - specifically 'souvenir plots'. In Scots law, a land owner (of at least a foot in size) is entitled, Laird or Lady - and therefore the owner can refer to themselves with that title.

While traditionally (in English Law), a Lordship can only be purchased or gifted to the recipient (usually for exceptional service to her majesty the queen or her government), in Scotland, the law allows any land owner to use the title.

There are some nuances to this that we are not representing very well but it is simply down to our lack of understanding of the law. Whether this can stand up in an official sense (like applying for your Passport to be Lord X is something we're not sure about).

Like us, you may also be confused and what many may not be aware of is that when you purchase the land, you're not entitled to it in the same way as if you purchased land outright.

The land purchased from Established Titles or Highland Titles is a 'souvenir' and is more representative than actually owning a bit of land. You are putting money into a pot that is used to maintain the land and improves the Scottish landscape/ wildlife. Therefore, while you may visit the land (at least for Highland Titles), you cannot build on it or fence it off (for example).

So, does owning a 'souvenir' plot of land make you a Lord or Lady? Yes.

Does it entitle you in the eyes of others? maybe not.

Put it this way, if you tell a Scottish person that you're Lord (your name) of Glencoe from Kentucky, you're not going to get special treatment. Likely the opposite.

What this is, is a lovely gesture, gift or something to make life a bit more exciting.

For the sake of balance, we need to talk about the elephant in the room. Although buying yourself a title is legal in Scotland, it is subject to a lot of bad publicity. Both Highland Titles and Established Titles have been the subject of articles written as an 'expose' of the 'scams' that they are.

Google even suggests 'Established Titles Scam' when searching the company online. This means that many people search for that.

The main objection is that 'you don't really own the land' - well, that is somewhat true. You don't really own the land but both companies seem to keep a record of their customers and recognise them as patrons of the land. In the same way, you don't own a donkey you sponsor with a wildlife charity, you're supporting the charity you put money into or the same way you own communal land on your estate.

In short - you pay to 'invest' in the upkeep of that land.

The second is that they do not give you an official title. As we've mentioned above, we're not experts, but the experts do seem to agree that selling souvenir plots does entitle the owner to a 'Lairdship'. Again, it does not mean you're an actual Lord, Like Lord Darcy, but it does make you a legal 'land owner'.

It is a bit of fun and a good gift.

Finally, there is the issue of mismanagement of funds and evasion of tax. Well, Highland Titles is a charity registered off-shore (and therefore does not pay tax) but they do invest significantly into their conservation efforts. Established Titles do not seem to have had any issues with money but they clearly do make an exorbitant amount of money and seem to be part of a holding company which is not based in the UK. Whether either company is run unethically is not up to us to decide.

As long as you know that this is a novelty, a bit of fun and does not entitle you to a genuine Lordship that grants you a personal relationship to the Queen, then you'll enjoy the experience at the very least.