Roughly an hour or so away from Dar Es Salaam sits a very small, yet important, port town called Bagamoyo. If you’re in the area (before or after your Safari or Zanzibar trip) for a few days and you’re looking to learn something about Tanzanian history, then Bagamoyo packs everything in at once.

Although the town seems to be a shadow of its former self, there are several sites of cultural and historic importance that explain a lot about the history of coastal Tanzanians. I have been to Bagamoyo on several occasions and have been to all of the ‘tourist attractions’ that are worth going to. So, I wanted to write a little post about the places that were worth going to and the places that weren’t.

How to get to Bagamoyo from Dar es Salaam

It is much easier to get to Bagamoyo than you’ll expect; it may require some planning before you go. The route is very easy to follow once you know which bus stand to stop at, which bus you’re getting and which company to use. The best bus to take changes all the time, so it is best for you to go to the big bus station on the new Bagamoyo road and buy a ticket from the official office.

Otherwise, there are Daladala bus services which run to Bagamoyo from the city itself. You will see these busses mainly on the northern tip of the city.

The best, and easiest, way to get to Bagamoyo is to drive – whether you hire a car or have one already. The best route to the town is via the t26 motorway. Although, this road can become extremely congested at peak times and making it in and out of the city can become a nightmare. Instead, take the Mwai Kibki Road north (towards the white sands hotel) and join the T26 at the Mbezi junction. Here the road will take you directly to Bagamoyo. This way you can avoid most of the traffic in the city, and enjoy a stressless drive. Regardless, avoid peak times if you can.

The drive is fairly stressless and will take you through a number of small towns and villages before reaching Bagamoyo itself.

Where to stay in Bagamoyo

Although there are several large, clean and organised hotels on the coast alongside Bagamoyo, I would personally suggest staying in Firefly. The accommodation may not offer the same facilities as the larger hotels, but it is a very relaxing place to stay and is situated in the heart of the old-town, running parallel to the town’s fish market. The accommodation sees a steady stream of tourists and is a good place to meet fellow travellers to Tanzania.

Firefly offers camping accommodation (if you’d like to spend a fairly inexpensive night under the stars), space for a campervan or access to themed suites which look out over the town. The rooms are fitted with Swahili wooden doors, decorated wonderfully and provide everything you need for a night’s sleep. The one thing I would mention is to take bug spray – because the mosquitos are vicious in Bagamoyo for some reason.

Firefly also has a small swimming pool, seating area and garden where you can order drinks or coffee. There is food available from a restaurant close by – but it is better to eat out we’d say.

The staff at Firefly are always very helpful, friendly and attentive too. I have stayed there many, many times and recommend it highly for a relaxing break from civilisation. 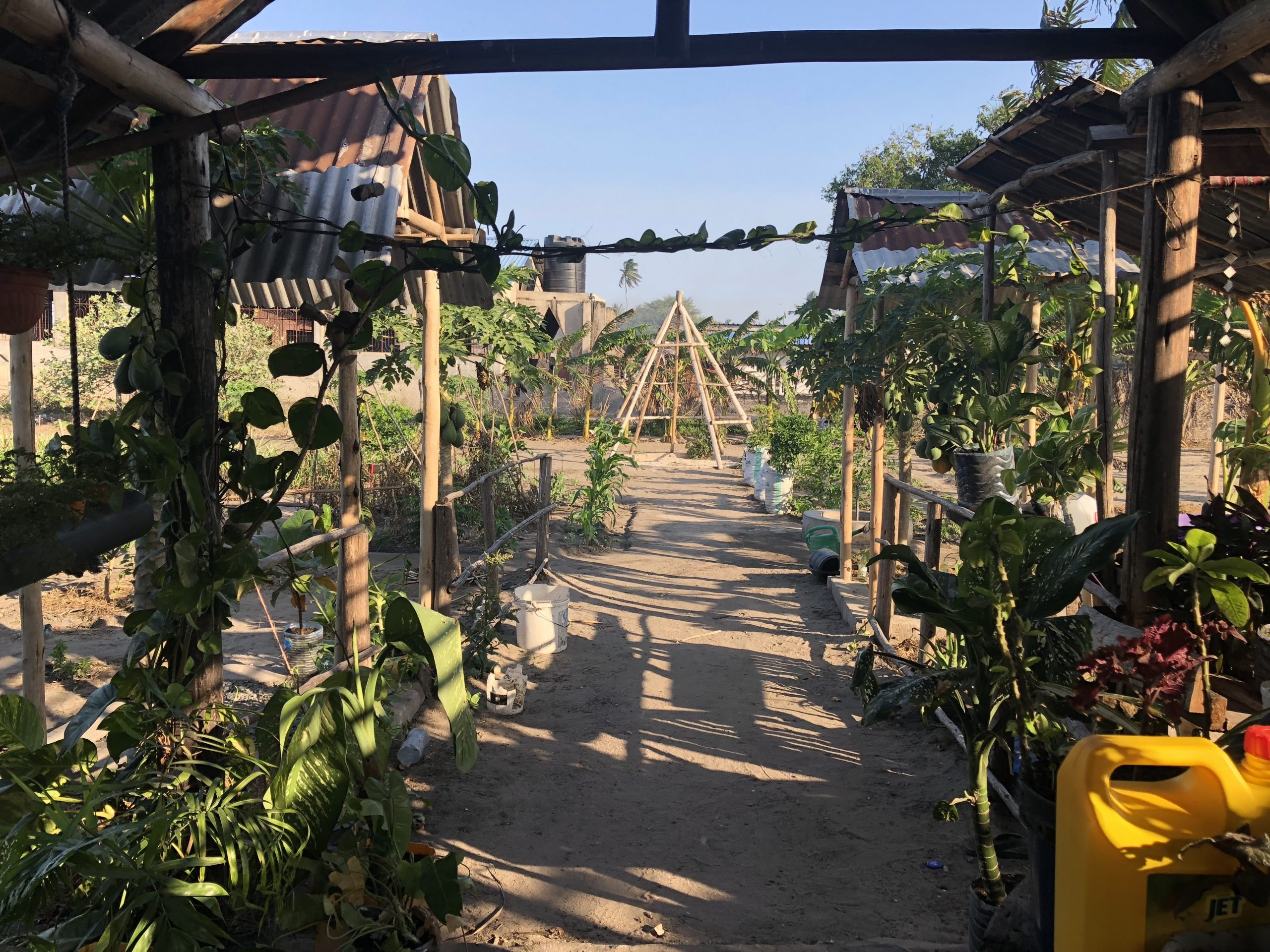 What to Do In Bagamoyo

The first thing that is always recommended for a trip to Bagamoyo is the Kaole Ruins – they have situated a short drive south of the town itself. You may get to the ruins with a Bajaj which will cost anything between 5000 and 10,000 shillings (make sure to haggle) or a taxi which may cost 10,000 to 15,000 shillings.

The ruins represent what is left of one of the oldest major settlements in East Africa.  At the heart of the ruin is a 13th-century mosque surrounded by a network of dwellings built between the 13th and 16th centuries. Alongside the historic building is a burial site with roughly 30 tombs which have been built with coral stone and identified by marked stone pilars.

This is a local tradition of the Diwanis – those who are believed to be the descendants of Sheikh Ali Muhama al-Hatim al Barawi, the most well-known Sheikh from the cost.

There is a small museum (which is home to exhumed artefacts – including Chinese tools which present as evidence of commerce between the communities) on the grounds and it is possible to employ a tour guide who can guide you around the grounds in numerous languages. Many are history graduates from the University of Dar Es Salaam.

Other than being a gateway into understanding the life of the original settlers in the area.

I’ve clubbed these together as they are similar and the Caravan Serai and Old German Boma can be seen in 20 minutes each.

The Old Boma is hard to miss when coming into Bagamoyo from the main road. It sits just off the roundabout heading into the heart of the old town. The building was built by the colonial German settlers in the 19th century and was intended as a home for their leaders in the area – the German leadership later moved into Dar Es Salaam (then known as Mzizima).

The building was subsequently used by the British from 1919 until the country gained its independence in 1961. As it stands, the building is protected as a site of historical importance. While you can walk around the building, there isn’t too much more to it. Interesting, but not very interactive; if that makes sense?

The Catholic History Museum (also known as the ‘Holy Ghost Mission’ is a collection of religious buildings (built-in 1872) that have now been converted into a museum which documents the history of Bagamoyo. The church itself is the oldest on mainland East Africa and the grounds hold the oldest known Baobab trees.

The port at Bagamoyo was where the very first German missionary landed in East Africa, which was then under Arab influence and used as a port to export slaves. It documents the religious significance of Bagamoyo and the many explorers who stopped by the town on their travels.

Some Advice: Upon arriving at the site, you may be confronted by ‘guides’. We paid for one of the guides who ended up following us around the museum and reading the descriptions that had already been converted to English. Most of the grounds have signs so it isn’t necessary to employ a guide – but you can if you wish.

Finally, the Caravan Serai Museum is another attraction mentioned on all of the websites. It is fairly underwhelming these days and has gotten worse over time. That is not to say that it is a completely worthless trip, but the Serai Museum pales in comparison to the Catholic History museum.

The Caravan Serai is interesting as it was the place where the slave caravans would start and has significance historically. The museum itself has a few artefacts and descriptions of those days but there was nothing particularly memorable.

The biggest surprise on our travels was the Snake park – it was not something we had expected. We had been told about the Crocodile Park (which is a famous local attraction) but not the snake. The two parks are south of Bagamoyo on the road you will be travelling to get to the Kaole Ruins.

It is very obvious that the snake park has seen better days. It is fairly run down and old but it was a surprisingly enjoyable experience. The park is small but a guide can take you around to look at all of the snakes that are indigenous to Tanzania, and others that are in captivity. We were given in-depth information about all of the snakes in the park, and the guide was able to answer all of our questions (despite the fact he was topless in flip-flops). We were also able to hold one of the (less venomous) snakes and saw a carrion bird. 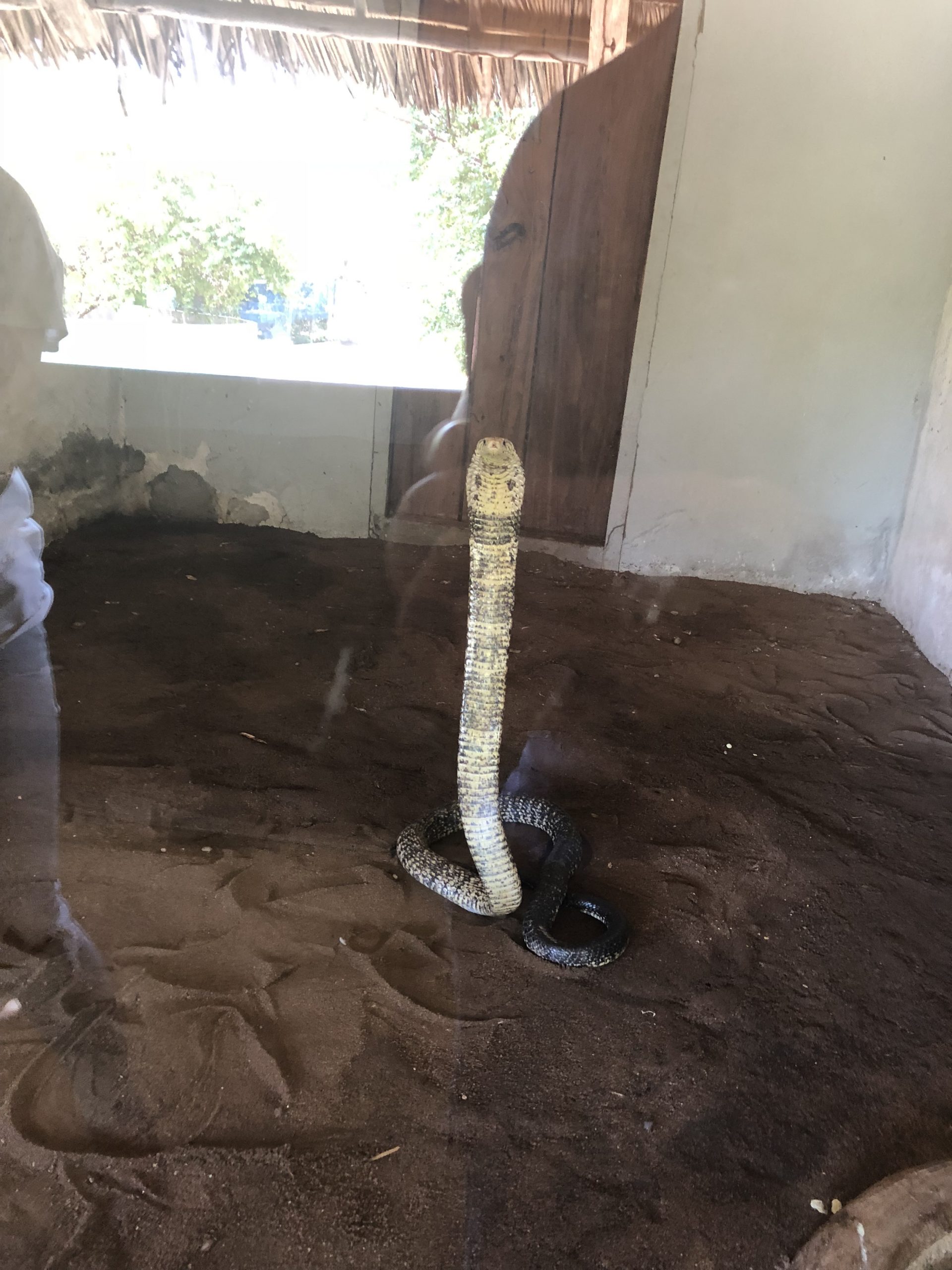 Although the Crocodile park was the attraction we had heard about, we took one step out of the car and decided that it was not for us. The place was extremely run down, the guides did not seem to know what they were doing and we saw from a distance that what we were about to experience was underwhelming.

We had already seen crocodiles on Safari so we didn’t want to pay to see some more hiding under filth in a mosquito-ridden bush. I’d say miss that part out completely.